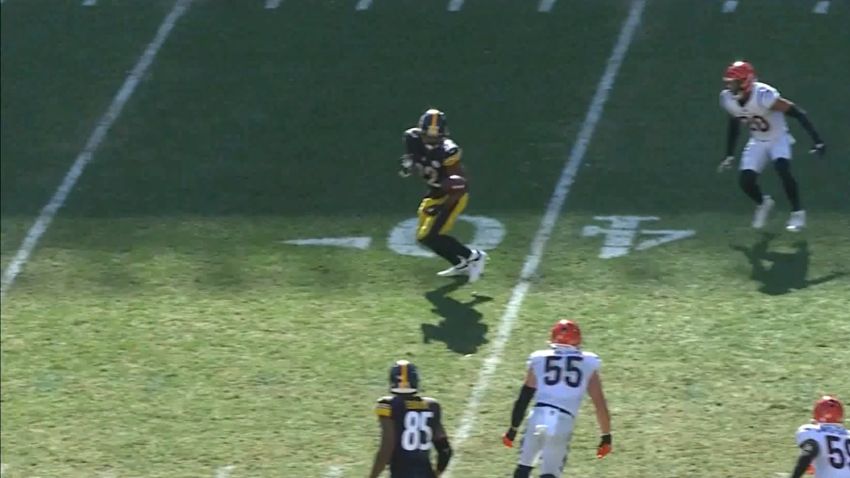 Pittsburgh Steelers rookie running back Najee Harris set a team record for the most receptions by a running back in a single game yesterday when he fielded 14 passes from quarterback Ben Roethlisberger, picking up 102 yards in the process.

Since 1950, only three running backs for the Steelers had recorded at least 10 receptions in a single game, Franco Harris being the first, and having done it twice. Le’Veon Bell recorded three such games, including a career-high 12, albeit for 88 yards. The previous team record actually belonged to Jaylen Samuels, who caught 13 passes against the Indianapolis Colts in 2019 for all of 73 yards.

I don’t know how many of those passes might have come by design, but according to Harris, none of his were in yesterday’s losing effort to the Cincinnati Bengals. He was the target on 19 of Roethlisberger’s 58 pass attempts, though most of his incomplete targets were on him for dropping the ball.

Asked after the game if he knew before the game that he would be such a big part of the game plan as a receiver, he said, “the game plan was to win, ultimately. How we did it, I wouldn’t say it was just to give me the ball. It just so happened I caught a lot of checkdowns. That’s really what it was. There wasn’t like no designed passes for me, just checkdowns”.

Harris has been very prideful and defensive of his receiving ability, particularly during the draft process, even sniping at draft analysts who suggested that he showed significant improvement in his ability to catch passes during his senior season at Alabama.

We saw some of that defensiveness during his post-game press conference during which he got a bit testy with a reporter—in this case Mike Prisuta—who was attempting to get him to comment on the incomplete passes that went his way. He struggled to understand Prisuta’s question at first, though there was no compelling reason as to why it should have been ambiguous, but ultimately conceded that he considered three of the five incompletions in his direction to be drops.

That included the final offensive play of the game, on which he was wide open by the numbers for a soft, easy completion that would have moved the chains on 4th-and-2. He already had his head turned around, preparing to go upfield, but the ball was on the ground by the time he got a chance to.

Not that it would have made much of a difference at that point. But if Harris is going to be an every-down back, including a third-down back who plays a big role in receiving, even if on checkdowns, he cannot put these balls on the ground. He was already dropping passes in the preseason, so this is not an anomaly.