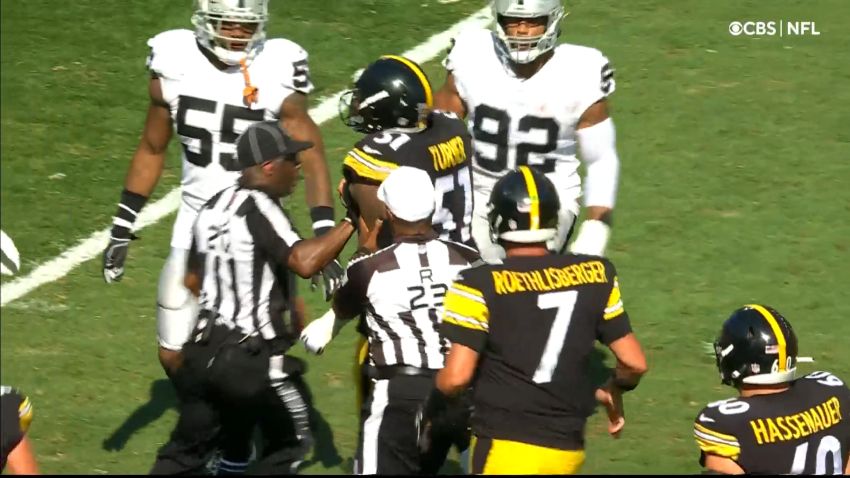 The Pittsburgh Steelers are licking their wounds, literally and metaphorically, after succumbing to the Las Vegas Raiders at home to drop to 1-1 on the season. Adding insult to injury, they also watched right guard Trai Turner get ejected from today’s game, and head coach Mike Tomlin continues to contend, as he did on the field, that his infraction did not merit the ejection.

Video on the field clearly shows that Turner did spit at a Raiders player, after several seconds following the Steelers’ second touchdown of the game. Both teams were flagged, resulting in offsetting penalties, but only Turner was ejected. Tomlin vehemently argued on behalf of his player after the ejection.

They always get the second spitter. #Steelers pic.twitter.com/B8BZF1tBxY

After the game during his post-game press conference, Tomlin contends that Turner was spit at first, and that he was, in fact, the second spitter.

“Somebody spit in his face”, he told reporters. “I understand the 15-yard penalties and so forth, gaining control of the game. I just—you know, Trai is not a young guy. He’s not overly emotional; he’s a flatliner. For him to respond the way that he responded, what transpired had to transpire, and I was stating that case to [the officials]. I didn’t believe he did enough to get kicked out of the football game. That was just my opinion”.

Turner was signed as a free agent in late June to take over the right guard position following six-time Pro Bowler David DeCastro’s release. An MRI during minicamp revealed that DeCastro would need ankle surgery, and as far as we know, he is still contemplating retirement as he remains unsigned, presumably still recovering from surgery (assuming that he had it).

Turner himself is a five-time Pro Bowler who is coming off of a rough stretch in his career in terms of health and performance, missing many games a year ago, which is why they were able to get him on the cheap on a one-year deal.

He has certainly flashed that Pro Bowl talent through (the better part of) two games now, but the offensive line remains very much a work in progress. While Turner will surely receive a fine for his non-consensual exchange of bodily fluids on the field, I don’t think it will result in a suspension.

If indeed he was spit at first, I imagine that will be found out, and that player should receive discipline of some kind as well, perhaps a suspension, even, given that he was not ejected from this game. With that said, any player, let alone a veteran like Turner, needs to understand that you can’t spit at people on the field. You only hurt your team.