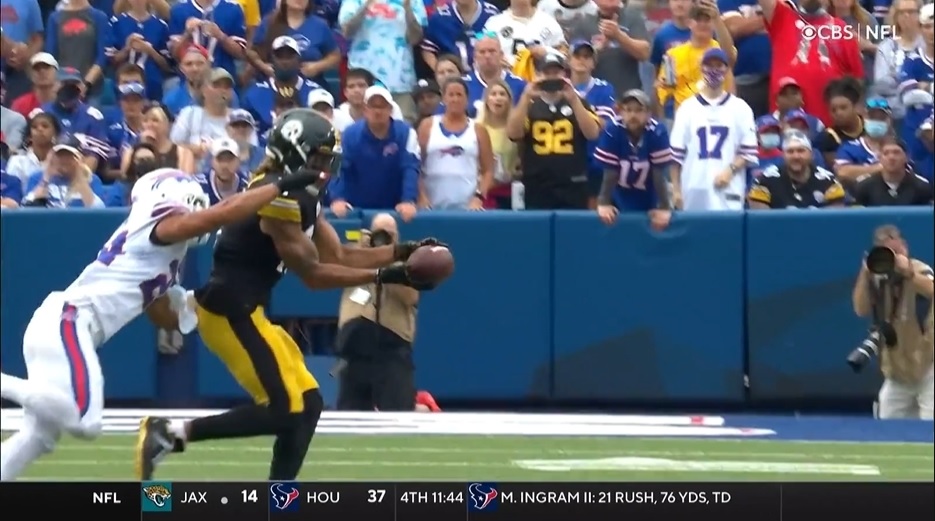 No Pittsburgh Steelers’ wide receiver put up a gaudy, Antonio Brown-like stat line in Sunday’s win over Buffalo. The leading receiver had five catches. The most yards just 52. Nothing in the box score that makes you jump out of your chair. But when called upon, Diontae Johnson, JuJu Smith-Schuster, and Chase Claypool stepped up. And Mike Tomlin couldn’t be happier.

“I was really pleased with the maturation process displayed by our receivers,” Tomlin said in a presser streamed on the team’s YouTube channel. “They didn’t get an opportunity to impact the game in a real positive way at the early stages. But they didn’t get frustrated. And they stayed in the fight and they made the plays when called upon.”

It was hard to make an impact early. The Steelers’ offense did nothing in the first half, unable to sustain drives, attempting and largely failing to get a run game going, and went into the half without any points. But things clicked a bit better in the second half. And all three guys put their hand in the pile.

Claypool made a leaping jump-ball grab over Bills’ star corner Tre White in the game and had a crucial third down catch on the Steelers’ final drive, setting up a 45-yard field goal by Chris Boswell to make it a two-possession game. Johnson had the catch of the day, a juggling, toe-tapping touchdown to give Pittsburgh their first lead of the game. And Smith-Schuster came up large with a back shoulder throw down the right seam late in the game, a 24-yard pickup on 2nd-and-7 that got the Steelers into Bills’ territory.

Tomlin used that moment to illustrate a broader coaching lesson.

“We got a really young receiver group. So it was cool to see them grow from a maturity standpoint and understand that element of it. That it is a collective. And maybe they don’t always get an opportunity to what maybe they are capable of doing all day. It’s just a collective. It’s a part of the team and what makes football the ultimate team game. I was really pleased with the maturation displayed by that group and their readiness when called upon in terms of the plays that they delivered.”

For a bunch of 20-somethings, no receiver complained about not getting the football. There was no feeling of obligation of getting the ball to any of them, as was the case with AB, even if that was largely warranted. Those guys did their job, showing patience, blocking, and waiting their turn.

Given the nature of football and the nature of “team” that Tomlin referred to, there will be games where the receivers will have to lead the group. Days where Pittsburgh’s required to throw to win the game. Based on what Claypool, Johnson, and Smith-Schuster showed Sunday, they’ll be ready whenever that time comes.