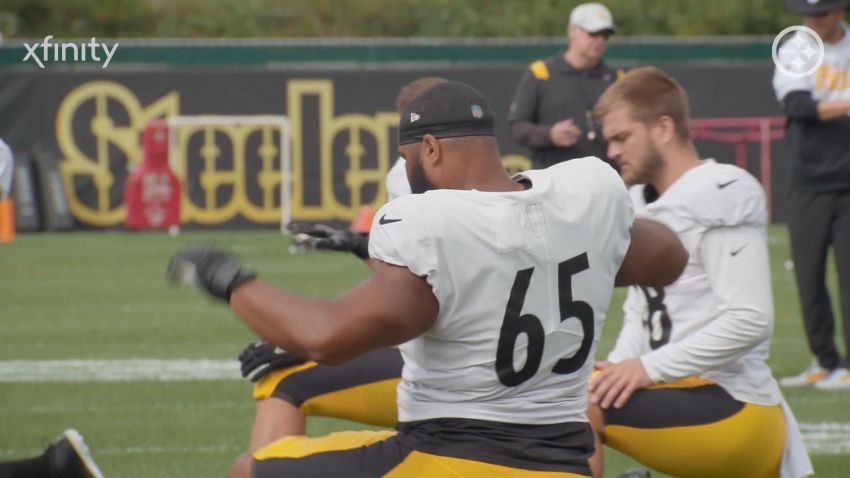 Whether they’re all out there for the first snap or not, the Pittsburgh Steelers will have four rookie starters on offense when they take the field on Sunday afternoon against the Buffalo Bills. Consisting of each of their first four draft picks, each of them worked their way in to the starting lineup under differing circumstances, but all, they feel, are their current best options.

“It is what it is. You play the best players you have”, offensive coordinator Matt Canada told reporters following Thursday’s practice when asked about having so many rookies in his lineup. “I think our guys have done a really great job. We’re really excited about all of them”.

The centerpiece of the youth movement is running back Najee Harris, the Steelers’ first-round draft pick who was deemed too valuable to participate in the preseason finale. He certainly flashed during his three games on the field, at the time, though you also sense that there is much more to be unlocked.

Pittsburgh used a second-round pick on tight end Pat Freiermuth, and after an impressive outing working with Ben Roethlisberger in the third preseason game, he was named a co-starter at the position alongside veteran Eric Ebron.

Two offensive linemen followed the skill-position pickups, the Steelers drafting center Kendrick Green in the third round and then Dan Moore Jr. in the fourth. Green was the favorite to start all along, but Moore’s opportunity to start—and possibly to keep the job—at left tackle, was afforded by a delay in Zach Banner’s ACL recovery.

Each of them have shown strong indications of possessing the sort of talent and pedigree that the Steelers believed them to have when selected. They’ve also shown that they are still very much rookies who are learning. But the coaches know that comes with the territory.

“We’re well aware that it’s their first game. We understand that”, Canada said, reasoning that they can mitigate some of the ‘rookie mistakes’. “I think we’ve got a good collection of guys around them, and we feel good about where they’re at. So we’re going to go play and let it go”.

What will help is that the offense does have stability under center in Roethlisberger, and they also return their entire receiving corps from last year, headlined by JuJu Smith-Schuster, Diontae Johnson, and Chase Claypool, who had a breakout rookie season in 2020.

As long as the veterans can make plays and do what they need to do, the rookies should have the space to grow, and make some mistakes if they need to. That is an unavoidable part of the process, but it should make them better, faster, in the long run.