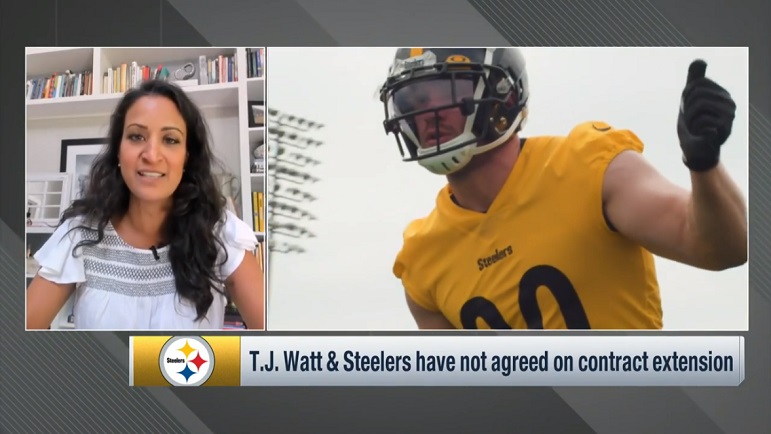 The Pittsburgh Steelers are close to signing outside linebacker T.J. Watt to a long-term contract extension, according to Aditi Kinkhabwala of the NFL Network on Thursday.

“I’ve been told that they are very, very close for weeks now and there’s certainly a feeling that this is indeed going to get done,” Kinkhabwala said on the NFL Network. “The issue here is that T.J. Watt, as hard as he has worked, because let’s make no mistake about this. T.J. Watt has been at every single practice, he has done every single individual drill, he did at every walkthrough, in every meeting, he has not actually done any team drills. He has not done any live hitting.

“And I did speak to a member of the coaching staff who said that, ‘Look, that does take some sort of acclimation.’ And there is a little bit of concern about the fact that when Week 1 comes, there’s not concern about T.J. Watt actually getting a new deal, there’s faith and hope that that is indeed going to happen, but there is a little bit of concern that T.J. Watt hasn’t done any live hitting.”

In typical Kinkhabwala fashion, there’s really not much meat on this news bone, if you will. After all, most of us expect Watt will sign a new contract prior to the team flying out of Pittsburgh to go and play their Week 1 road game against the Buffalo Bills, and that’s now just a little more than a week away. So, yeah, very, very close is kind of obvious at this point and if you are confident that deal will indeed get done.

The Steelers are now off until next week, and on Wednesday defensive coordinator Keith Butler was asked if he expects to have Watt practicing fully when the team resumes next week.

“That’s a good question,” Butler said. “Don’t know. That’s all I’ll say about it. The last time I opened my mouth too much, so I’ll just keep it quiet this time.”

Watt is currently set to earn $10.089 million in 2021 after having the fifth-year option in his rookie contract picked up by the Steelers well over a year ago. Many people, including myself, believe that Watt will become the NFL’s highest-paid defensive player by Week 1. If that happens, Watt’s new money average could come in right at $30 million.

If Watt does sign a five-year extension that includes a $30 million new money average, the total of that deal figures to be right around $160.089 million, Such a deal could also include Watt earning $45-$50 million in 2021 with a large chunk of that money being paid to him as a signing bonus.

As Kinkhabwala stated in her report, Watt has yet to practice fully this offseason. Additionally, he did not play in any of the team’s four preseason games. If he’s going to practice fully at the start of next week, him doing so would likely come on the heels of him signing his new lucrative extension by late Sunday night.

So, stay tuned, Watt news is on the way.