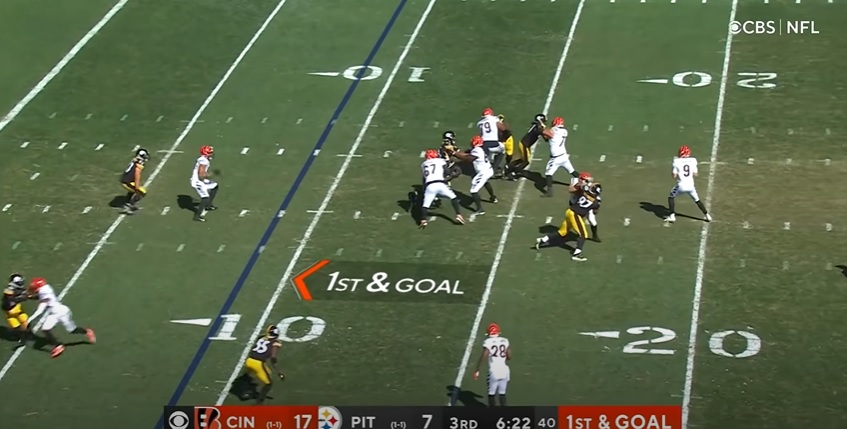 Last Sunday, for the first time in nearly five years, the Pittsburgh Steelers’ defense went a regular season game without a sack. Not only that but they barely pressured Bengals’ QB Joe Burrow, who sliced and diced the Steelers’ secondary to the tune of three touchdowns in a comfortable win.

If the Steelers don’t want Aaron Rodgers to have a repeat performance, Keith Butler knows they have to turn up the heat this week. Speaking to reporters after today’s practice, Butler emphasized a point that’s felt like a given about this defense for decades.

Excluding plays negated by penalty, the Steelers had just two pressures on Burrow’s 19 dropbacks in Week 3, a pressure rate of just 10.5%. Week-by-week, their pressure numbers have fallen.

Per our charting, here’s a look at their weekly pressure rate.

Of course, the Steelers were without starting EDGE rushers T.J. Watt and Alex Highsmith against the Bengals. They instead relied on the likes of Jamir Jones and Derrek Tuszka to get after the quarterback and understandably, there was a dropoff in production. It didn’t help Pittsburgh chose to drop Melvin Ingram into coverage 38% of the time in the first half of last week’s game but ultimately, it was no surprise to see the team’s pass rush suffer.

With Watt and Highsmith possibly returning this weekend, the pressure will hopefully turn up. For Butler, they’ll need it most in any potential “sudden change” situations.

That failure occurred against the Bengals. Cincinnati found the end zone after both of Ben Roethlisberger’s interceptions with touchdowns to Tyler Boyd and Ja’Marr Chase. On the latter, the team’s lack of pass rush was really evident, a five-man rush that still didn’t get home, giving Burrow a clean pocket and all the time in the world to wait for Chase to flash open in the back of the end zone.

Five man rush against just a five man protection. But Joe Burrow has the cleanest pocket a QB is ever going to see. Looks more like a 7 on 7 drill. No one wins their 1v1 matchup and Burrow able to scan the entire field before hitting Chase for his 2nd TD. #Steelers pic.twitter.com/pk83Zq9p3l

The only way to slow down a quarterback like Aaron Rodgers is to hit him or as James Harrison so eloquently puts it, “smash his face in.” Pittsburgh will need to that as much as much as they did in their only win of the season, harassing Josh Allen and leading to his worst game of the year.