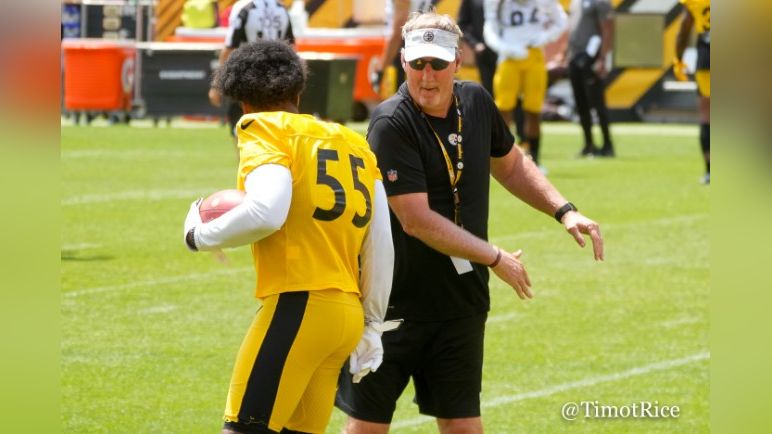 Just days before the Pittsburgh Steelers make their 2021 regular-season debut, there remain a number of unanswered questions about what their lineup, and their schemes, will look like. But that’s according to the plan, as much as it is anything else, as defensive coordinator Keith Butler said earlier today.

“I’m very ambiguous because I want to be. I’m not going to tell them what we’re doing”, he told reporters when he was being asked questions about how he might use difference defensive backs in Sunday’s game against the Buffalo Bills, such as using Joe Haden to shadow wide receiver Stefon Diggs. Video is not currently available at the time of publishing.

“He’s a good player. He’s one of their best players. He should be an All-Pro. That’s what he should be”, Butler said of Diggs. “We have a plan for him. There’s different things we’re gonna do against him and against the quarterback also, so I’d rather wait and let them see it for the first time, instead of hearing it from me”.

It is unclear how the secondary will look on the first snap of the game, as well as in between, and who will be in what roles. Haden, Minkah Fitzpatrick, and Terrell Edmunds, of course, have their positions. Cameron Sutton should be a safe bet to start on the outside. There’s a high degree of probability he will slide inside in the nickel.

The fact that we don’t know is a good thing, because it means Buffalo doesn’t know either—as long as the Steelers do know. And presumably, they do. Presumably, they have a plan. That plan may even be to sort through a variety of options to see what works.

After all, they haven’t had Witherspoon for long, for example. They don’t have much of a data set on him and what he is capable of doing in their defense. They might try him out in some packages and figure out where to go from there based on what they see.

But at least they’ve given themselves some options to work with. Pierre could play. Witherspoon could play. Maulet could play. Even Tre Norwood could play. The more variables there are, the less prepared the Bills can be for whatever the Steelers might show on Sunday.