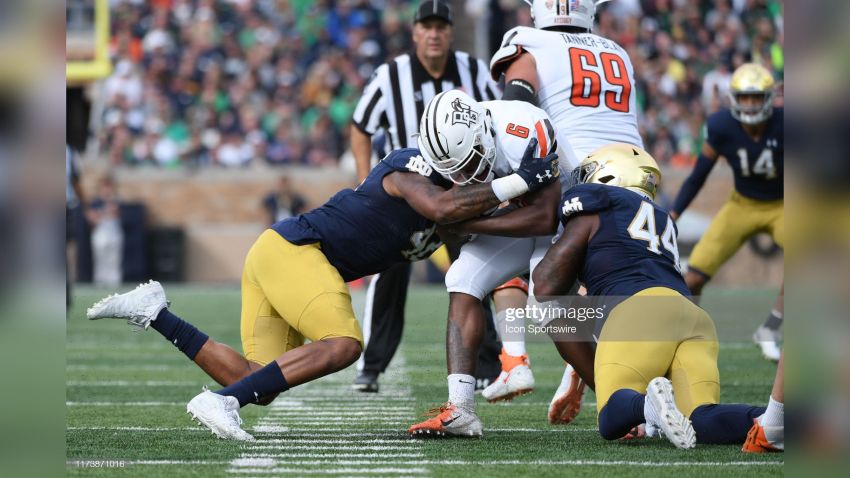 Jamir Jones had the opportunity to play with a lot of quality players during his time at Notre Dame, including his new teammate, second-year wide receiver Chase Claypool. He also had the luxury of being in a deep defensive line room when he was moved to the edge for the Fighting Irish in 2018, during which season he did not play.

But he learned a lot from his peers, like 2020 third-round pick Julian Okwara, 2021 fifth-rounder Daelin Hayes, and 2020 fifth-round pick Khalid Kareem. He himself went undrafted last year, and didn’t even make it through a training camp, but is now on the Pittsburgh Steelers’ 53-man roster, and he credits the immense help of his former teammates in getting him here.

Notre Dame is a school that is built on its alumni, and that includes the football program, where former players remain close with the current roster, and Jones said that he was even getting help from older players who were out of school by the time he got to campus.

“Even the older guys, Romeo [Okwara], he’s also been a great help for me”, the first-year linebacker mentioned. “They just continue to feed me knowledge. Even Coach [Mike] Elston, he was a great part of the reason why I’m here today as well”.

Now, he’s in yet another room from which he fully intends to benefit. He has the luxury of having possibly the best defensive player in football at his disposal in T.J. Watt, who should be returning to practice very shortly once his massive new contract is completed.

While the room also includes three-time Pro Bowler Melvin Ingram, Jones has also talked about how even second-year Alex Highsmith has been a tremendous help. Highsmith came into the league incredibly polished last year in terms of his knowledge when considering his background; that’s his studious nature paying off, and he’s already passing it on.

As much as we might like to argue otherwise, we all get where we are because we had people who were willing to help us along the way. That peer-to-peer learning is often crucial in football as a supplement to formal coaching, and we see that play out for guys like Jones.