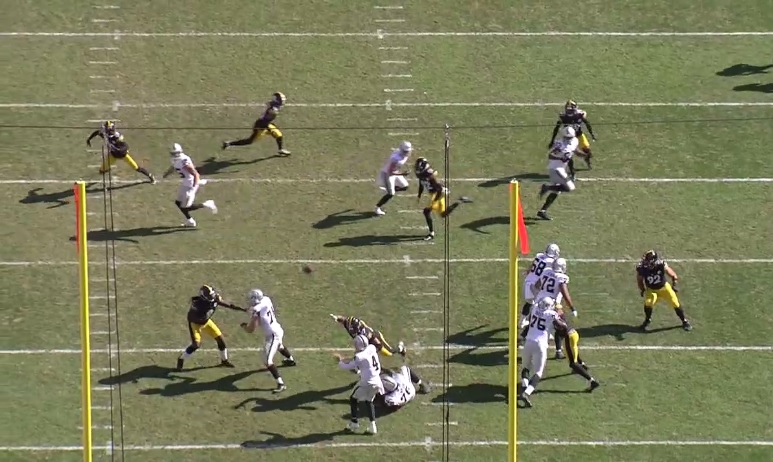 We have and we’ll continue to talk plenty about the issues that led to the Pittsburgh Steelers loss Sunday to the Las Vegas Raiders. But on a slightly happier note, Cam Heyward was again his dominant self against LG John Simpson. Much like his performance against the Buffalo Bills, Heyward continues to be one of the best, and definitely the strongest guy on the field.

Heyward is aligned as the three tech between LT and LG below. Heyward snaps off the football and immediately gets into LG John Simpson’s chest, driving him backwards and getting penetration on this zone run to the left. He blows it up, forcing the back to slow down and try to cut the ball back against the grain of the blocking scheme.

After doing all that, Heyward is able to shed the block and make the tackle behind the line of scrimmage for a loss. Terrell Edmunds and the defense does well to rally and help clean up the play, too.

That combination of explosiveness, punch, power, vision, and finish are all on display here. A great rep against Simpson, who may be the backup left guard but is big and strong (6’4″, 321, 34 reps of 225 at the Combine).

Next clip comes from later in the drive. Heyward is aligned as a true 5-tech here, with the Steelers shifting Alex Highsmith as the off-ball linebacker over the B gap. He secures the playside B gap initially and the back bounces to his left due to Joe Schobert shooting the gap. Heyward is then able to stay clean as Miller goes to the ground, jump over him, and make the tackle as the back attempts to get vertical. And probably saves a touchdown.

Pittsburgh was in a tough spot here, playing a nickel defense against the Raiders’ heavy, 13 (1 RB, 3 TE) personnel. Would’ve been easy to give up a score on the ground here. But Heyward is able to hold his gap and then find the ball when the runner tries to make a play.

Heyward wins best with power, and that was certainly evident this weekend. Again, the guy he’s facing is a big strong dude but Heyward’s bull remains the best in the league. Here, Heyward uses a straight bull rush to out-leverage Simpson and run him backwards into Derek Carr’s lap. Combination of leg drive and power almost gets home, though Carr’s pass is ultimately complete.

But here’s the rush of the day. Again, Heyward on #76. One of the nastiest bull rushes you’re ever going to see. Simpson doesn’t trip over himself or a teammate. Heyward just forklifts him backward and Simpson isn’t able to stall it out with his hop step technique, buckling and going to the ground.

Finally, there’s his effort. Heyward runs to the ball as hard as any defensive lineman in football. That’s on display here. A disappointing catch and run here allowed by James Pierre to Hunter Renfrow. But Heyward, at the line of scrimmage on the throw, takes a good angle to the ball and puts on the afterburners. Makes the tackle 12 yards downfield to stop the bleeding.

Two looks at it from each view. Note that he’s basically running step-for-step with Robert Spillane.

Heyward’s snap count shot up from 66% in Week One to 85% against the Raiders, a number more in-line with his norm. While that comes at the cost of not keeping him fresh throughout the year, the Steelers don’t really have a choice now that they’re without Tyson Alualu and Stephon Tuitt. Heyward even picked up a snap as a true, base 3-4 nose tackle against the Raiders.

Until this group gets healthy, mainly when Tuitt returns, Heyward is going to keep having to play at this level. The good news is he’s playing some of the best ball in his career during these first two weeks. And he has a date with the Bengals, who he’s always played well against, up next.