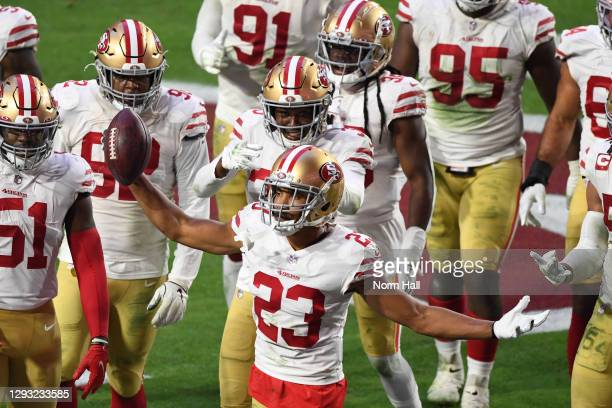 After news broke on the Pittsburgh Steelers trading a 2023 fifth-round selection to acquire Seahawks CB Ahkello Witherspoon, many questioned what he role may be in the Steelers secondary in 2021. On paper, Witherspoon is an accomplished player, starting 33-of-47 games played in his first four seasons in the league after being selected in the third-round of the 2017 NFL Draft, logging 117 total tackles (99 solo), two TFLs, 24 PBUs, four INTs, a forced fumble and a fumble recovery to begin his NFL career.

He signed a one-year pact with Seattle after playing his first four seasons with the 49ers, but Seattle opted to move on with D.J. Reed s their starting cornerback, thus making Witherspoon expendable via trade.

Knowing that Pittsburgh played San Francisco in 2019, I wanted to go back as see how Witherspoon fared in his lone matchup against Pittsburgh in his career. Witherspoon played 43 snaps (81%) on defense along with five special teams snaps in the 2019 matchup with Pittsburgh. According to the advanced defensive statistics provided by Pro Football Reference, Witherspoon surrendered three completions on seven targets (42.9% completion rate) for 80 yards and a touchdown. He also had two solo tackles, one of which resulted in a tackle for loss, but also was at fault for two missed tackles on the day. His passer rating when targeted was 125.0 with an average of 11.4 yards allowed per target.

Now a large portion of Witherspoon’s yards allowed in coverage occurred on this pass play to #19 JuJu Smith-Schuster over the middle of the field on the deep over route where JuJu got a step of separation on Witherspoon when braking to the inside of the field, catching the ball in-stride and continuing to run after the catch as Witherspoon attempts and fails at a diving tackle, falling to the ground as JuJu turns up the left sideline and takes the intermediate pass to the house for the long touchdown. You can see that Witherspoon was slow to turn his hips and run with JuJu as he broke inside, leading to that initial separation over the middle of the field.

Witherspoon is a long, wiry cornerback, standing at 6’2 and 195lb. While he has been clocked at a 4.45 40, he lacks that quick twitch a smaller nickel corner would have, relying more on his size to play the pass than his quickness. Because of this, he can be a tad slow on his click-and-close on the football once thrown, making a play braking downhill to impact the pass. We see this on this completion allowed to #18 Diontae Johnson in off-man coverage where Witherspoon gives five yards of cushion to Johnson underneath, allowing the easy completion on the out route to the sideline as Witherspoon is too far off of Johnson to contest the pass and rather escorts him out of bounds.

As you probably noticed above, Witherspoon also was charged with two missed tackles on the day against Pittsburgh. One of his missed tackle attempts came on this play with Johnson catching the ball in the flat near the left sideline. Witherspoon does a good job breaking down to make the play for a short gain, but whiffs on the tackle, reaching out his left arm at Johnson rather than taking his full body through the receiver, ultimately resulting in Johnson cutting back inside and gets tackled by #56 Kwon Alexander after the miss by Witherspoon.

While Witherspoon’s performance against Pittsburgh had its negatives, He also made several positive impact plays in pass coverage as well as in run defense. He can be inconsistent at times as a tackler as Alex Kozora mentioned in his breakdown of the signing, but his effort and willingness as a tackler has noticeably improved since his days at the University of Colorado. His length, size, and reach make him a capable tackler should he utilize good technique. We see that on this play where Witherspoon comes downhill once he sees the screen pass to JuJu Smith-Schuster, showing good pursuit as he comes in to chop down the receiver in the backfield for the loss on second down.

Here is another example a few plays later where Witherspoon sees the underneath pass to JuJu and closes ground, breaks down on the receiver and gets in on the tackle attempt. I personally would have liked to see Witherspoon wrap up JuJu and drive his feet on contact on this rep, but he does aid the initial tackler by getting him on the ground.

In pass coverage, Witherspoon presented a challenge for #2 Mason Rudolph to accurately deliver the ball to his intended target given Witherspoon’s size and length to cover up receivers running down field. On this pass attempt to the end zone, Witherspoon does a great job running in-stride with JuJu up the seam as Rudolph tries to throw it over Witherspoon, but ultimately overthrows JuJu thanks in-part to tight coverage by Witherspoon in the end zone.

We see a similar play in the third quarter where he is tasked with covering Diontae Johnson who is running the go route up the left sideline. Witherspoon does a good job carrying Johnson up the sideline on the outside release, running step-for-step with Johnson in coverage until the end of the play as Johnson starts to get a step on Witherspoon, but Rudolph overthrows Johnson on the deep ball attempt with Witherspoon on his hip the entire time.

While Johnson was able to create some separation at the top of his route, Witherspoon’s size and length makes the pass difficult for Rudolph for complete as he tends to want to lead his receiver on the deep ball rather than put it right on him for fear of Witherspoon playing the ball in the air on the contested catch and causing a pass deflection or possibly taking the ball away by intercepting the pass. Witherspoon’s size helps minimize possible passing lanes and forces the opposing QB to deliver an accurate ball down the field.

As mentioned earlier, Witherspoon only played 81% of the defensive snaps and left the game in the fourth quarter due to injury. Fellow Steelers Depot contributor Tyler Wise noted that Pittsburgh took advantage of Witherspoon’s absence in the secondary shortly after he left the game on this pass play to Diontae Johnson on the go-route. Johnson easily creates separation against backup cornerback #27 Jason Verrett, stacking him at the top of his route and walks into the end zone for the touchdown after hauling in the well-thrown deep ball by Mason Rudolph.

Overall, there are several positives and negatives that can be taken from Ahkello Witherspoon’s performance against Pittsburgh. As it was mentioned after the trade by Tyler Wise, Witherspoon can be a feast-or-famine player at times, having moments where he flashes in coverage but others where he shows poor technique as a tackler or allows separation too easily in coverage. It remains to be seen whether-or-not Witherspoon will compete to start immediately on the outside opposite of Joe Haden or if the plan is to ease him in with James Pierre playing outside when Cam Sutton kicks inside to the slot in the defense’s nickel package.

Still, Witherspoon’s size and length is undoubtedly an asset to have in the secondary as Pittsburgh has shifted its focus of having smaller, quicker cornerbacks to having longer defenders that can close passing lanes with their reach and ability to cover ground.

Witherspoon should be able to match up with bigger receivers on the outside like Tee Higgins for the Bengals, but also could factor into Pittsburgh’s plans to cover TEs detached from the LOS like Mark Andrews, Austin Hooper, and David Njoku they expect to see in divisional matchups given Witherspoon’s size, length, and ability to contest the jump ball. Time will tell what Witherspoon’s role in the defense will be, but given the price to acquire him, I’m a fan of the move.

What are your thoughts on the acquisition of CB Ahkello Witherspoon? How would you grade his 2019 performance against the Steelers? What do you think his role will be for the defense? Please leave your thoughts in the comments section below and thanks again for reading!