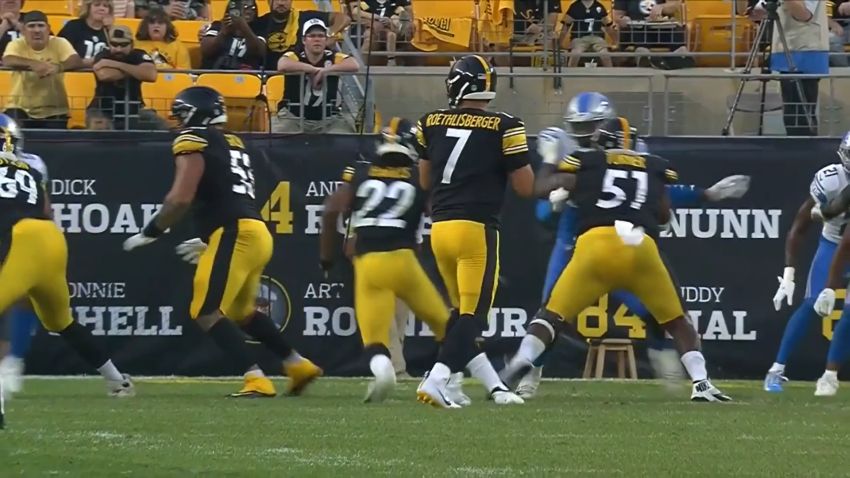 The Pittsburgh Steelers felt a change was needed in the offensive leadership this offseason, making the decision not to renew the contract of Randy Fichtner as offensive coordinator, and ultimately promoting Matt Canada into that role. He will now call the plays, and run his system. But how different will it look? And how much of it have we already seen?

“It’s preseason. We didn’t show a lot, I’m sure Detroit didn’t show a lot”, quarterback Ben Roethlisberger said earlier today when asked that question, referring to the three series that he played in one preseason game last month.

While Roethlisberger only played 19 snaps, however, virtually everybody else that he will be out there with logged a healthy amount of playing time, including the four rookie starters: running back Najee Harris, tight end Pat Freiermuth, and offensive linemen Kendrick Green and Dan Moore Jr.

Green and Moore make up an offensive line that is 100 percent different from last year’s season opener, also featuring Kevin Dotson and Trai Turner at guard, with Chukwuma Okorafor at right tackle, who backed up Zach Banner in week one in 2020.

“A lot of guys up front got a lot of reps. They played a lot of those games and stuff”, Roethlisberger said of the new-look line. “I’m not even sure how many times one group was together, the combinations that we had. A lot of guys got experience”.

The line, of course, is also under new management, with Adrian Klemm being promoted to head offensive line coach from an assistant role in which he served for the past two years. There’s also a new quarterbacks coach in Mike Sullivan and a new tight ends coach in Alfredo Roberts. And new plays. And new names for plays. And new ways of running them.

“We’re going to kind of have to learn on the fly, all of us. Learn about each other”, Roethlisberger said of taking this new offense into the regular season. “It may not be pretty early, and we have to accept that fact too. At the end of the day, we just have to do what we have to do to win a football game”.

Steelers fans are familiar with watching offenses that don’t necessarily look pretty, even when they’re effective, so that in and of itself won’t be a concern. But the question, of course, is whether or not they can produce, and as Roethlisberger said, it’s about doing what you have to do to win.

That’s one thing Roethlisberger has always been able to do, is go out and find ways to win. He has 169 of them in his NFL career, including the postseason. He won 12 games a year ago. It will be much tougher sledding duplicating that feat, even with an extra game, this year.