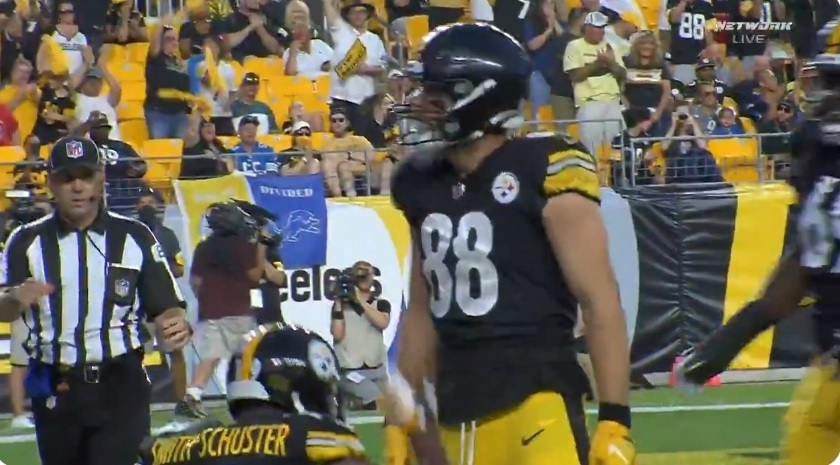 Splash plays.  Every team wants them but how do they happen? This article is going to look at the defense of the upcoming opponent focusing on the three big plays they allowed the previous or recent weeks. It’ll take a look at the whole play including details such as personnel, formations, blocking schemes and route combinations. As a follow up to each play, there will be the Steelers Scenario identifying the player or players who could benefit by running similar plays.

Minnesota will start with two receivers in the slot to the left with a tight end on the wing. There is receiver split wide to the right and a running back aligned seven yards off the ball behind the quarterback who is under center. Cincinnati is in their nickel defense that starts in a Cover 2 look and will rotate to a Cover 3.

At the snap, the quarterback will open to his left and fake the handoff to the running back Alexander Mattison (25) before tossing it to Justin Jefferson (18) who was aligned the farthest outside to the left and is coming on and end around.  The tight end Tyler Conklin (83) will come across the formation from the wing and be a lead blocker.

Jefferson has the option to run or pass here as he as K.J. Osborn (17) who was aligned in the slot next to him running a shallow Cross and Adam Thielen (19) who was wide right running a Corner route after feigning to block the safety. The end around action pulls up the linebackers and Thielen has the corner and safety covering him leaving the intermediate level open. Jefferson decides to throw and hits Osborn for an 11 yard gain which could have been bigger if he threw it earlier

Steelers Scenario – With as dry as the Steelers offense has been why not start here with a trick play.  Chase Claypool is used most often as the end around so he’ll have the run/pass option.  James Washington will draw the deep attention and you run JuJu Smith-Schuster on the crossing route. The may need to go in the other direction if Claypool is left handed.

Going for it on fourth down, the Vikings have two receivers to the left, a tight end inline to the right and receiver split wide to the right. The quarterback is in shotgun with the running back flanking to the left.  Cincinnati is playing a Cover 0 which is basically Man coverage with no safety help deep. The idea is to apply pressure quickly with tight coverage to try to get the quarterback to get it out quick.

Prior to the snap, Thielen will go in motion from the left slot to the right slot basically confirming Man coverage and slot corner Mike Hilton (21) will travel across the formation with him. This is a simple play with simple routes.  The two outside receivers will run deep Comeback routes and the tight end Conklin will run a shallow Crossing route while covered by the safety Vonn Bell (24).

Thielen has the advantage against the slot receiver and will run an Option route.  He has the choice to go inside or outside based on the leverage of the defender. Even though Hilton has help from MIKE linebacker Logan Wilson (55) who is showing blitz in the B gap but will drop into coverage, Thielen uses a jab step to the outside to beat Hilton easily and races 24 yards for the touchdown.

Steelers Scenario – I like the aggressiveness on fourth down here. In this situation I want my best route runner in the slot and that is Diontae Johnson. Instead, go with Smith-Schuster who is money on big downs.  He should be able to win the one on one situation and make the play

Fourth quarter and down by three the Vikings are trying to get into field goal position. They are going two run four vertical routes to try to make the defenders make some decisions.  To the left Jefferson will run his Go route toward the side line and Osborn will run up the seam.  On the other side, Conklin is up the seam and Thielen is on the outside.

It looks like the safety Jesse Bates (30) and the corner to the bottom Eli Apple (20) are tasked with playing the deep half meaning they will cover half the field and try to split the distance between the two receivers to their side so they can react to either in time.  Bates is in good position but Apple is too close to the outside receiver leaving Conklin up the seam open over the top of the underneath defenders. The result is a gain of 27 yards getting a good chunk of the yardage needed to get into field goal range.

Steelers Scenario – This is a situational play and a downfield play. I’m not even sure how often Pittsburgh runs four verts generally.  But Claypool, Smith-Schuster and Washington along with Freiermuth could lead to a big play if Cincinnati were to continue to run this coverage in late half scenarios.