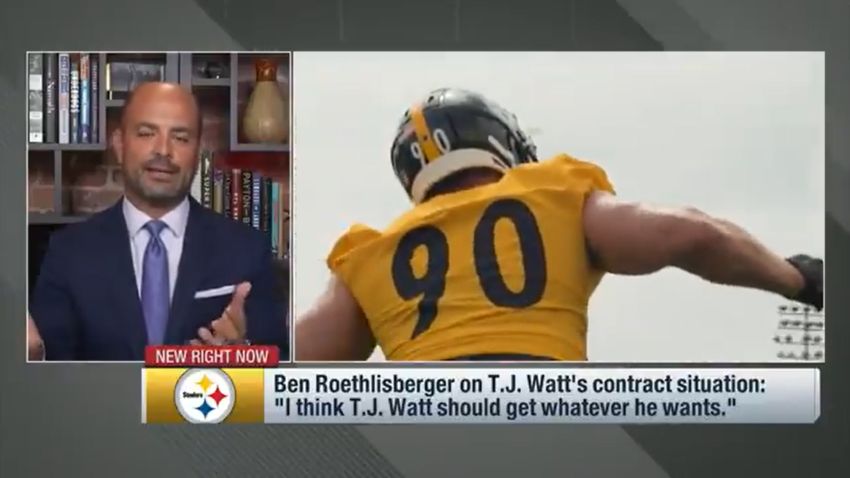 The Pittsburgh Steelers are approaching the midnight hour to get a contract extension done with fifth-year outside linebacker T.J. Watt in time for the start of the regular season, an artificial deadline they’ve set for themselves in recent decades, though which plenty of other teams are willing to work beyond.

While it’s impossible to know the specifics of the negotiations, having no insider knowledge of the conversations, it’s widely believed that the biggest hang-up between the two parties is an issue that has dogged the Steelers on the market, to some degree, for years, and increasingly so. That would be their refusal to offer fully guaranteed money beyond the first year of an extension.

It was the reason that their negotiations with former running back Le’Veon Bell collapsed, two years in a row. And it’s something that agents all around the NFL are hoping that Watt’s representatives can finally break, in anticipation of it setting a new precedent of which they can take advantage.

“The Steelers’ policy of not having guarantees beyond year one, I’ve spoken to agents not connected to the T.J. Watt thing who are rooting for T.J. Watt and his agents on this one, because it drives them nuts, and they’re not the only team that does it”, Mike Garafolo said on the NFL Network yesterday. “Cincinnati does it. Green Bay does it”.

From NFL Now on @nflnetwork earlier on why agents who don’t even represent the #Steelers’ T.J. Watt are rooting for him to get the team to break its “archaic” contract policy. pic.twitter.com/TAVHsA0zTO

Garafolo’s ensuing list, though, was exhaustive. Pretty much the Steelers, the Bengals, and the Packers are the only teams who refuse, beyond quarterback contracts, and slotted first-round picks, to guarantee money beyond year one of any new contract signed.

The reason that players prefer fully guaranteed money should be self-explanatory, though I should set the record straight here based on comments I’ve seen: Fully guaranteed doesn’t mean he can just quit and get paid like Bobby Bonilla. He still has to show up.

There are many ways a player can violate terms in a way that voids guarantees. That’s something that happened to former Cleveland Browns first-round cornerback Justin Gilbert, which is why, when the Steelers acquired him in his third season, they were able to cut him before year four without paying his salary, which was guaranteed when the deal was first signed, but was since voided for disciplinary reasons.

As for teams, we’ve already talked about how the vast majority of them are willing to guarantee money beyond the first year of a deal, doing so in order to entice a player to sign, whether it’s their own player or in free agency (which is where the Steelers really hurt themselves with this policy).

The only risk, really, is the inability to make that player a salary cap casualty if necessary—though, again, you can restructure his deal to create space—nor can you cut him just because you think he didn’t fit what you wanted to do.

From the player and agent perspective, it’s easy to see why there is a rooting interest here. Every agent would like to do business with every team, maximizing their ability to get the best deals for their clients, and thus themselves.

The Steelers have routinely been an obstacle for agents with high-profile clients because of this refusal to guarantee salary beyond the first year, and when they fail to acquire these guarantees when they do work out a deal, it damages their reputation. So if Watt’s representatives can break that barrier, they win, bigtime, but so do all agents, potentially, who may work with the Steelers in the future.

Garafolo actually touches on some of the points that I brought up, such as the relative unimportance of guarantees provided that the intention is to retain the player. Referring to Ben Roethlisberger, he said, “full guarantees didn’t necessarily mean that much to Roethlisberger. In T.J. Watt’s case, he’s looking at Joey Bosa’s deal, because you’re always comparing it to the other guys at your position”.

Bosa, of course, did get guaranteed money, north of 70 million, going all the way into the third year of his deal. “The Steelers are saying, ‘no, we want to keep the fully guaranteed money in year one’. It really only makes it harder for them”, he said,

“I don’t understand this archaic way of thinking—that’s the word that agents are using when I ask them about it—because now you have to load up the signing bonus, and you have to increase the salaries year by year by year to make the player feel good”, Garofolo continued.

Will the stalemate be broken before the start of the regular season? Will the Steelers actually concede the issue and offer some full guarantees beyond the first season? Watt is back on the practice field, either way, so we still expect him to be on the field—he is under contract, after all—but it will be very interesting to see what precedent is set here when the dust settles.