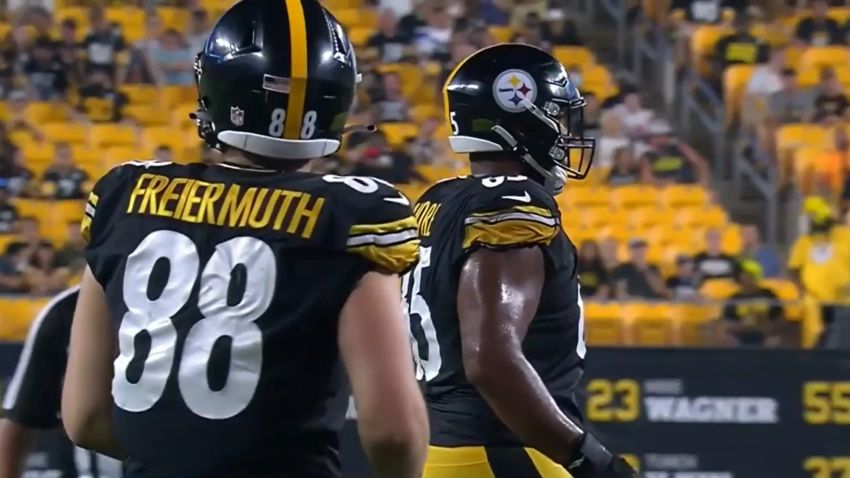 Reasoning: The rookie tight end was named a co-starter for the Steelers’ offense on the first official depth chart for the regular season on Monday.

When the Steelers take the field on offense for the first time on Sunday, it’s going to look very different—and also very young. Depending upon what package they come out with for the first play, it’s quite likely that there will be four rookies, all starters, on the field together.

That includes second-round tight end Pat Freiermuth, who as mentioned was named co-starter at the position alongside veteran Eric Ebron. Without seeing it unfold on the field, it’s hard to know exactly what that means in practice, but, in theory, it obviously indicates that he’ll have a bigger role than many may have anticipated initially.

It certainly helps when you account for two touchdowns on the three drives your starting quarterback plays during the preseason, as Freiermuth did. Both of his end zone grabs were impressive feats in and of themselves, requiring adjustment that goes beyond the type of layup you would expect any tight end to catch.

While Freiermuth might not be quite as athletic as Ebron, he has more than enough dexterity to him to get himself around the field and into positions for Ben Roethlisberger to find him, both for clutch plays and for some big plays as well.

And unlike Ebron, he has a reputation for being a sure-handed receiver, which will play very well for any quarterback. His work in the red zone in particular has been pointed out a number of times, and he talked about the importance of learning to play in those tight spots when the field gets shorter.

Of course, he is somewhat of a work in progress as a blocker, as is to be expected, but that will come with time and repetition, and really, the best way to learn it is by being on the field, so I’m all in favor of getting him out there.