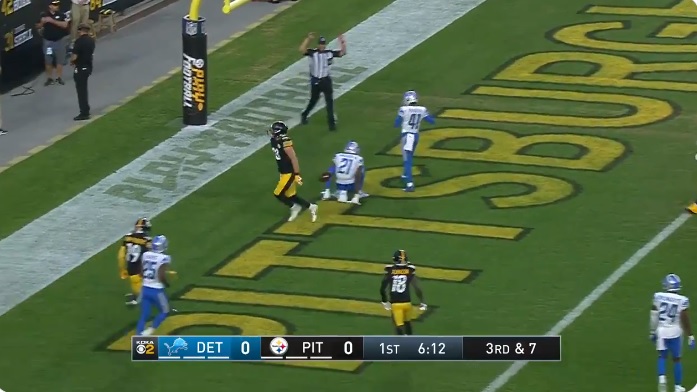 That’s a heck of a start to his NFL career for 2021 second-round draft pick Pat Freiermuth in his Pittsburgh Steelers’ preseason home debut. To hear the Penn State product talk about his sparkling home debut against the Detroit Lions Saturday in the Steelers’ third preseason game of the year, Freiermuth attributes his showing to the work he’s put in during the offseason in OTAs, minicamp and training camp.

Freiermuth has consistently caught nearly everything his way throughout training camp, according to our own Alex Kozora, and flashed his great hands once again Saturday, hauling in a leaping touchdown on the Steelers’ second drive from Ben Roethlisberger, and then made his spectacular twisting, leaping, toe-tapping catch in the back of the end zone on the third drive from Roethlisberger, taking a star turn in front of Steelers fans.

His ability to make those tough catches Saturday night under the bright lights are a direct testament to the work he’s put in during training camp with Reothlisberger, who has challenged his receivers in unique ways throughout his career, throwing balls high, low, behind…anywhere in the receiver’s vicinity to try and challenge the young guys and learn about them and how they adjust to the football.

Going through that with Roethlisberger all summer long made catching the football easier Saturday night for Freiermuth.

“Yeah, it helps a lot. I mean, the first time in OTA is when he was throwing it like all over the place with me and I was just very confused. I was like, am I doing something wrong?” Freiermuth told reporters following Saturday’s win. “Am I doing that kind of stuff? And, like E [Ebron] and Zach were like, ‘dude, he does this to like, see what your range is, all that kind of stuff.’ So it helped me a lot in OTAs and training camp, stuff like that. I’m putting it where, you know, he sees where my I can make adjustments or stuff like that. So, it’s awesome. You know, that kind of showed on the field today.

“You know, it, it was definitely, it was hard, but, you know, like I said, I worked at it all camp and worked that kind of route combination on camp,” Freiermuth added. “So, you know, obviously there was some ups and downs in camp with that route, but, you know, it showed today with the preparation stuff like that.”

It’s great to hear and see that all the work a rookie is putting in right away is translating to the playing surface, especially a young tight end like Freiermuth, who already faces a steep learning curve coming into the NFL at the position he plays.

Plenty of pundits in the past have questioned Roethlisberger’s poor passing technique throughout the offseason, but to hear a young player like Freiermuth credit it for his success in certain situations is a huge boost to Roethlisberger’s offseason technique.

It remains to be seen if Freiermuth can carry over the production from training camp and preseason into the regular season, but it feels like the Steelers really have a guy at tight end moving forward.