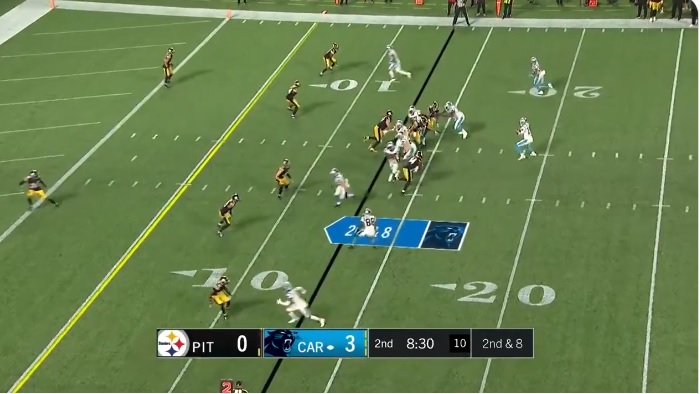 Winners and losers from the Pittsburgh Steelers 34-9 loss against the Carolina Panthers Friday night.

James Pierre: Not a ton of bright spots tonight in this forgettable finale. But Pierre played well. Focus was on run support and tackling, an aspect we noted in the offseason but one we hadn’t talked about much this camp. He was a sure tackler and aggressive in his run fills and support. Gotta play the run to play on this defense regardless of your position. Good way to show a well-rounded game. Barring a big-name outsider coming in, this team has to put him in nickel packages to start the year.

Jamir Jones: Jones showed power as a pass rusher and continued to make an impact on special teams with another tackler. He might be the team leader in that category this preseason. We’ll have those numbers over the weekend. Really pushing hard for that #4 OLB spot. Leaving it all on the table.

Isaiah Buggs: Perhaps Buggs didn’t do anything “new” for this team with Mike Tomlin commenting he knew he could play the run. But Buggs did that well tonight, strong at the point of attack and able to get off blocks in the run game. Multiple run stops in this one. With Stephon Tuitt’s situation unclear, it might be smart – and certainly worthy – of this team keeping seven defensive linemen. Buggs included.

Benny Snell: A “light” winner tonight if there is such a thing. He didn’t have a lot of running room but broke off a nice 17 yard run, had a great pickup in pass pro, and soaked up much-needed reps throughout this game. He needed more carries than Anthony McFarland or Kalen Ballage and he got them. Is it enough to secure his roster spot? We’ll see.

Chris Wormley: Worth showing him a little love here in this one. He’s played well all camp. We just haven’t touched on it much. But he got pressure tonight that nearly led to a sack and played good run defense. Important depth on this team.

Everyone: Ok, not literally. But pretty close. One of the sloppiest games I’ve seen, even for preseason finales. Offense couldn’t do anything, defense quickly fell apart, special teams was ugly in moments. One of those games you can’t wait to get over and done with. I don’t know how much film review gets done for a preseason finale. But it sure isn’t pretty. Burn the tape.

Dwayne Haskins: This was Haskins last chance to push for the #2 job. He didn’t take advantage. Sure, a slice of that can be chalked up to a lot of Steelers’ backups against a talented Panthers’ defense. But that didn’t result in late throws or inaccurate passes. The Steelers’ offense went nowhere and Haskins didn’t do much to help the cause.

Mathew Sexton: Here lies Mathew Sexton’s 53 man roster chances. Last week, he took a risk on a punt and it paid off, fielding the ball from his five and running it back 47 yards. This week, he took a chance on a punt and it blew up in his face, muffing a bouncing ball recovered by the Panthers. He knew he wasn’t going to fair catch his way to a roster spot. But his chance of making vanished tonight.

Ray-Ray McCloud: McCloud’s night wasn’t as poor as Sexton’s. But it definitely wasn’t good. One catch on his first six targets and a couple drops/almost drops. He salvaged things late with the Steelers’ only touchdown but it was still a poor performance.

He may still win the job by default and he certainly wasn’t going to be kept because he’s a competent wide receiver, it’s largely for return duties (and he’s done well there, to be fair), but he embodied how uneventful the offense was tonight.

Missed Tackles: It was the Steelers’ fourth preseason game and they played like the slop-fest it typically is. They were going against some of the Panthers’ starters but that’s no excuse. Too many misses and at one point in the third quarter, led to  a run defense allowing nearly five yards per carry. Should be interesting to see how Josh Carney charts everything later this week. Spencer Brown’s 20 yard run shouldn’t have happened. He cut through the entire Steelers’ defense. Yikes.

Kameron Canaday: Mike Tomlin billed this finale as a long snapper battle. And Christian Kuntz appears to be the only one who showed up. Kuntz snapped the first and second half of this game. One Twitter user told me Canaday wasn’t even on the field tonight. If that’s true, I couldn’t tell you why. Maybe he got hurt, maybe he got dealt. Either way, it might mean Kuntz is the Steelers’ guy.