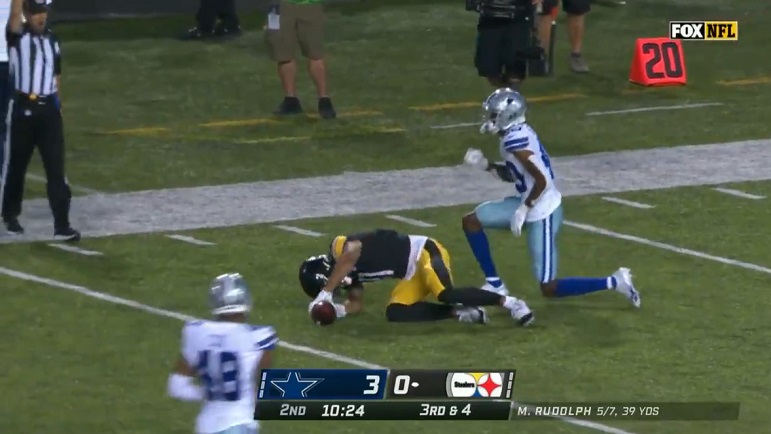 The Pittsburgh Steelers won their first preseason game of 2021 Thursday night as they topped the Dallas Cowboys 16-3 at Tom Benson Hall of Fame Stadium in Canton, OH. The team, according to Steelers head coach Mike Tomlin after the game, seemingly will head back to Pittsburgh relatively healthy overall.

“A few bumps and bruises along the way,” Tomlin said during his post-game press conference. [Kalen] Ballage I think had a lower body injury that’s being evaluated, and we’ll probably have more information for you the next time we get together.”

Ballage, who rushed for 19 yards and a touchdown on his five carries against the Cowboys. is battling for a spot on the Steelers 53-man roster. The Steelers signed him to a one-year contract earlier in the offseason after he spent the 2020 season with the New York Jets and Los Angeles Chargers.

The Steelers did get a square with wide receiver Chase Claypool Thursday night as last year’s second round draft pick out of Notre Dame stayed down in the ground a little while after hauling in a deep first half pass from quarterback Mason Rudolph down the left side of the field. Claypool eventually limped off the field after getting up off the ground. Tomlin was asked about Claypool after the game, and he said he was fine.

The Steelers will resume training camp practices on Saturday at Heinz Field and their next preseason game will be next Thursday night on the road against the Philadelphia Eagles.