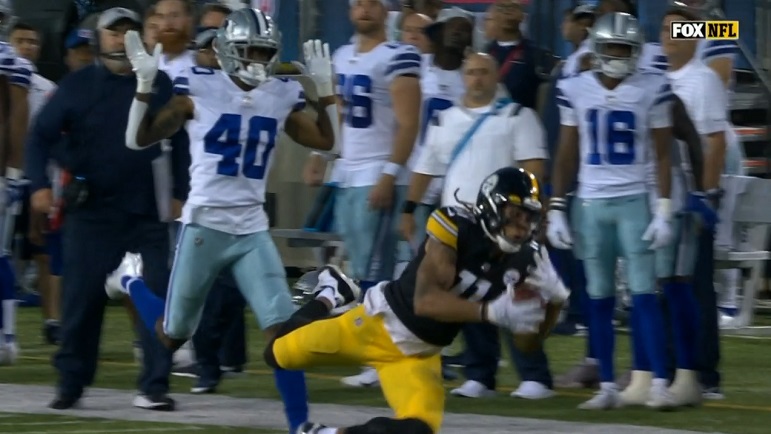 Steelers second year wide receiver Chase Claypool led all Pittsburgh players with a PFF grade of 88.3. Claypool, who did have a drop in Thursday’s game against the Cowboys, also had three receptions for 62 yards and a long of 45 yards, via a deep pass down the left sideline from quarterback Mason Rudolph. Claypool also graded out well as a run blocker in the 15 total offensive snaps that he played against the Cowboys.

The second-highest-graded Steelers player from Thursday night, according to PFF, is outside linebacker Alex Highsmith, who played 23 total defensive snaps against the Cowboys on his way to registering three total tackles of which one was as sack via an inside spin move. One of Highsmith’s other tackles also resulted in lost yardage. PFF also credited Highsmith with two hurries in addition to his sack.

As for other top graded Steelers players from the Thursday night game, running back Kalen Ballage (86.0), tackle Joe Haeg (82.0), Rudolph (81.5) and tight end Kevin Rader (76.6) rounded out the top five on offense behind Claypool. Rudolph, who started the Thursday night game for the Steelers, finished 6-of-9 passing for 84 yards with no touchdowns or interceptions. He did fumble during an attempted jet sweep handoff to Claypool early in the game, however.

As for a few other Steelers notable players and their PFF grades, quarterback Dwayne Haskins 54.2 ranked 26th overall out of 31 offensive players graded. Wide receiver James Washington 44.5 was 30th overall. Defensively for the Steelers, inside linebacker Robert Spillane (28.2) was 31st out of 31 players graded on that side of the football. Fellow inside linebacker Ulysees Gilbert III (42.0), who started alongside Spillane Thursday night, was ranked 29th in PFF’s grading of Steelers defensive players.