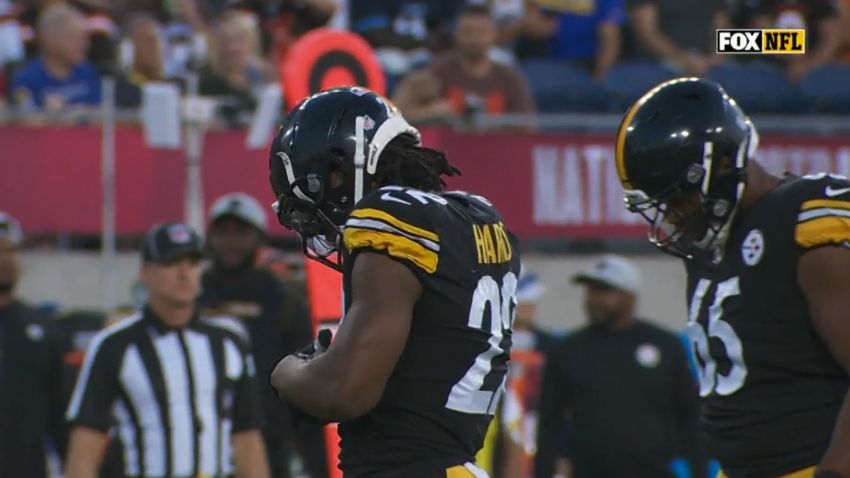 The Pittsburgh Steelers are preparing to unveil a very different running game in time for the 2021 season, and the feature change is at the running back position with Najee Harris in the backfield, in whom they invested a first-round draft pick back in April.

Not only is he entering the NFL as a rookie (of course), though, he’s also preparing to help inaugurate the league’s first 17-game season. But the Steelers and running backs head coach Eddie Faulkner have no reservations. In their minds, he’s built for it.

“Being at a program like Alabama and coming from somewhere that plays a lot of games, he’s all the way ready for that kind of situation”, Faulkner told reporters following Sunday’s practice. “I’m not too concerned about it. And he’s got an appetite for everything that’s football-related, so it’s not like you even have to wind him up, and he’s special in that regard. So, in this particular case, I’m not worried at all”.

While he hasn’t been on the field yet, at least in a meaningful game, everyone who has been around Harris has had the same story to tell about his work ethic and his dedication to his craft, his willingness to get into the details of every aspect of his job. It’s a work in progress, as it is for any rookie, but he’s getting there.

“It’s just a matter of how quickly he can pick up protections and the details of things we do to figure out what you can put on his plate”, Faulkner said regarding the only obstacle that he can foresee for his rookie runner heading into his first season. “But so far that’s been smooth”.

During his senior season at Alabama last year, Harris accumulated 251 carries, along with another 43 receptions, for nearly 300 total touches across 13 games. He also totaled 1,891 yards from scrimmage, with 30 touchdowns.

As you all know, head coach Mike Tomlin is a fan of the bell cow running back. The Steelers absolutely intend to give their new first-round pick plenty of work, not just as a runner, but also as an integral part of the passing game.

Perhaps they would do that whether or not they were sure he was ready for that. But they are confident that he is. Everything in his background, both professionally and personally, tells them that he’ll have no problem adjusting to the NFL calendar and workload.