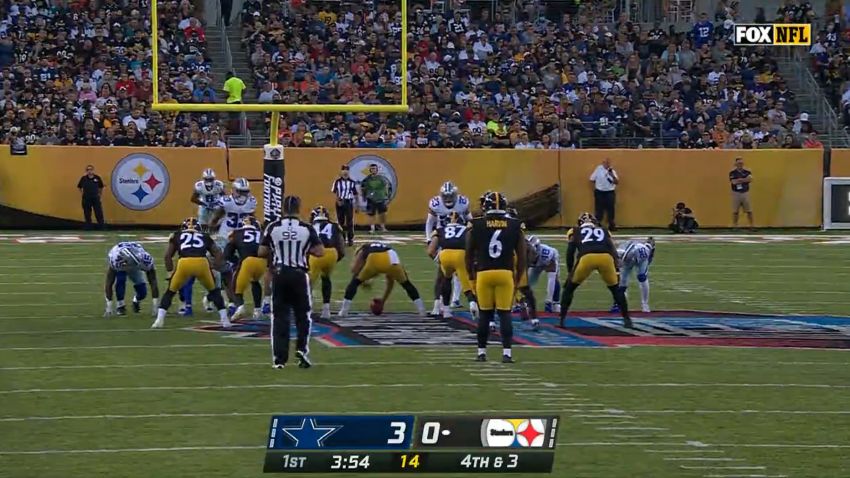 The Pittsburgh Steelers managed to win last night’s game over the Dallas Cowboys by a score of 16-3, but even the score does not indicate how genuinely pedestrian the proceedings were for them on offense especially, and to a lesser extent on defense as well.

But their special teams units did stand out, particularly their rookie punter, seventh-round pick Pressley Harvin III, who punted four times during the game and did not allow a return, netting an average of 45.8 including three kicks inside the 20, one downed at the one, and another roller that was muffed for a special teams takeaway.

“Pressley did some nice things, but I thought they all did some nice things”, head coach Mike Tomlin said after the game, making sure to spread the credit around. And they did have others making plays. First-year wide receiver Mathew Sexton offered a spark in the return game, for example, while others, like Calvin Bundage and Shakur Brown, were noticed on coverage units.

“I thought Sexton was a big punt returner. I thought it ignited us. I don’t know that we had done much, offensively, until then. That was like a springboard for us moving forward. I just like the energy and efforts of a lot of people”, Tomlin said.

The Steelers found their return man during training camp last year when they brought in Ray-Ray McCloud, at the time a two-year veteran. He hadn’t had much NFL success at that point, but he made the team as the fifth wide receiver and performed well both on punt and kick returns. Sexton’s opportunities in the preseason this year, though, could potentially challenge him.

And you always need coverage guys, of course, especially since you lose a couple every year. “Bundage I think made a couple tackles on kickoff, that was kind of good to see, but we’ve got to comb through that in a big way”, Tomlin said. “It’s about the minutiae, it’s not necessarily about the things that jump out at you”.

They even had a field goal attempt blocked, by rookie seventh-round defensive back Tre Norwood. The only blight on the night for them was kicker Sam Sloman, who missed his first two attempts, including an extra point, but frankly, he never really stood a chance of making the team in the first place.

If Pittsburgh is not going to have a top-10 offense this year, then it will have to find an edge wherever they can, and special teams can help provide them a spark here and there, as it did last night. Getting a free possession, or robbing your opponent of points, never hurts.