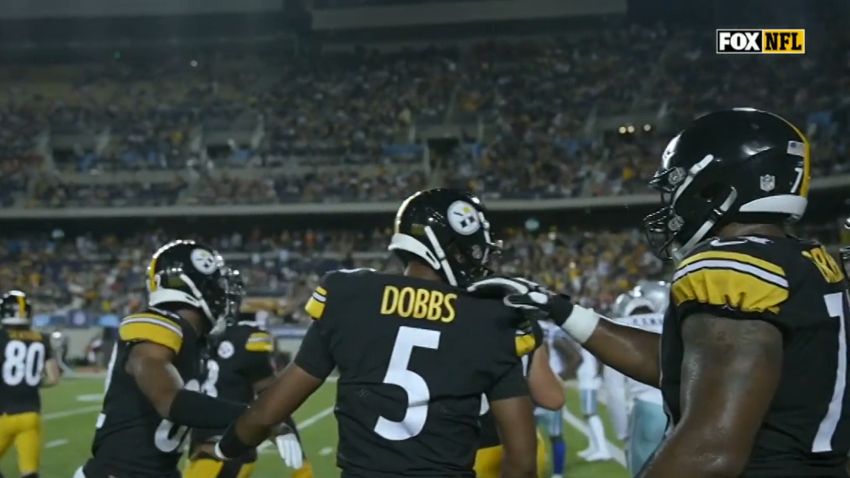 Who is going to be the Pittsburgh Steelers’ backup quarterback? This has been one of the most widely-discussed questions throughout training camp so far, and the conversation has centered around Mason Rudolph and Dwayne Haskins, the latter a 2021 addition and a former first-round draft pick.

Still, head coach Mike Tomlin doesn’t want people to forget that they have four quarterbacks on the roster, including Joshua Dobbs, a fifth-year veteran who has spent every game of his career on a 53-man roster. The Steelers originally traded him a game into the 2019 season when they were offered a fifth-round pick for him, but they wasted no time in bringing him back last year when he was cut loose.

Dobbs closed out the game on Thursday night and tossed the first touchdown pass of the NFL season, finding Tyler Simmons in the end zone. In all, he completed four of six passes for 37 yards, including a 17-yard connection with…Trey Edmunds. Tomlin said after the game that he was not surprised by Dobbs’ showing.

“He’s been with us before and performed similarly when given an opportunity. This guy’s not going to back down from the competition”, he said. “You guys keep asking me about Rudolph and Haskins. He’s not going anywhere. We were in a training camp session set a number of years ago and it was Jones and Rudolph and Dobbs, and nobody was asking me about Dobbs, and he came out of it”.

By ‘came out of it’, Tomlin actually means that he won the backup quarterback job. That was during the 2018 season, his second year in the league, when they drafted Rudolph in the third round. Landry Jones was their backup at the time, and most assumed that the writing was on the wall. He either had to win the backup job or be released, the former not seeming very likely.

But he did win it, even if he would lose the job to Rudolph a year later. He still beat out Devlin Hodges to remain as the third quarterback until the Jacksonville Jaguars offered a fifth-round pick for him, but had that not happened, he likely would have spent every second of his career with the Steelers.

It was even somewhat of a surprise when the team re-signed him this offseason, waiting until more than a month into free agency before doing so, but he is still here, and still performing in training camp and the preseason.

Does he really stand much of a chance to stick to the 53-man roster, though, with Rudolph and Haskins, both of whom at least represented themselves reasonably well in their debuts? I would think not, but he’s defied the odds before. And there’s always the practice squad.