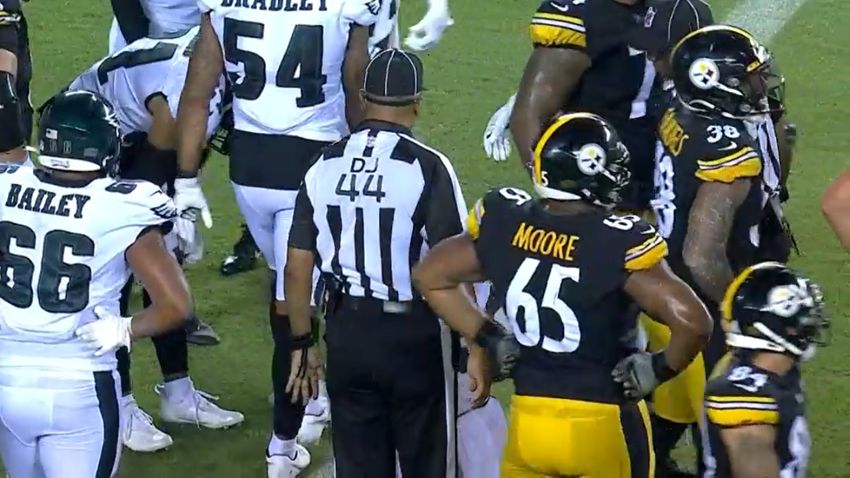 The Pittsburgh Steelers drafted two offensive linemen in the middle rounds of the 2021 NFL Draft. One of them was in the first-string lineup during team drills in today’s practice, and it wasn’t third-round center Kendrick Green, who had an excused absence, according to head coach Mike Tomlin.

It was Dan Moore Jr., the fourth-round pick out of Texas A&M, but, for the first time since he was drafted, he was lining up on the right side of the offensive line. He actually started the first preseason game last week, playing left tackle, while Chukwuma Okorafor was out. Today, with Zach Banner not participating, he got first-team reps on the flip side, as Tomlin continues to see growth.

“Man, significant” growth, he said he’s seen from Moore, when asked after practice. “He doesn’t perform like a young guy. But sometimes, particularly when you look at the circumstances that he comes from, he’s in that SEC West, played left tackle over there, and logged a bunch of starts. Man, that’s like dog years. So that experience is showing, and we’re gonna challenge him this week and let him play on the right side some and look at his positional versatility”.

Despite the growth displayed since OTAs, it is not necessarily a great indication that he is in the running to compete for a starting job, either at left tackle or right tackle, if they are beginning to flip him around. Instead, it suggests that they are preparing him to be the gameday swing tackle, and that they are going to need him to be able to play on both sides.

Not that that should be surprising. Offensive line coach Adrian Klemm said right after drafting Moore that he anticipated he would be able to compete right away, but I don’t think that was ever regarded as the most likely outcome, even if he continues to make steady progress.

There isn’t a tackle who has started right away for the Steelers for some time, though. Even Marcus Gilbert, a second-round pick in 2011, did not start right away. He did start the second game of his career, but that was only because Willie Colon suffered a season-ending injury in the opener that year.

One thing the Steelers have loved to do with their young linemen, more specifically their young tackles, has been to break them in as a tackle-eligible, giving them the opportunity to get on the field and get some live reps before they have to be called upon for 1000-plus snaps a season.

It’s something Okorafor did as a rookie. Banner did it in 2019. Jerald Hawkins was in that role last year, and during the 2017 season as well. Mike Adams and Kelvin Beachum and Chris Hubbard, they’ve all done it since 2012.

That could be Moore’s first assignment. And that’s fine. As long as he continues to grow and his arrow is pointing up.