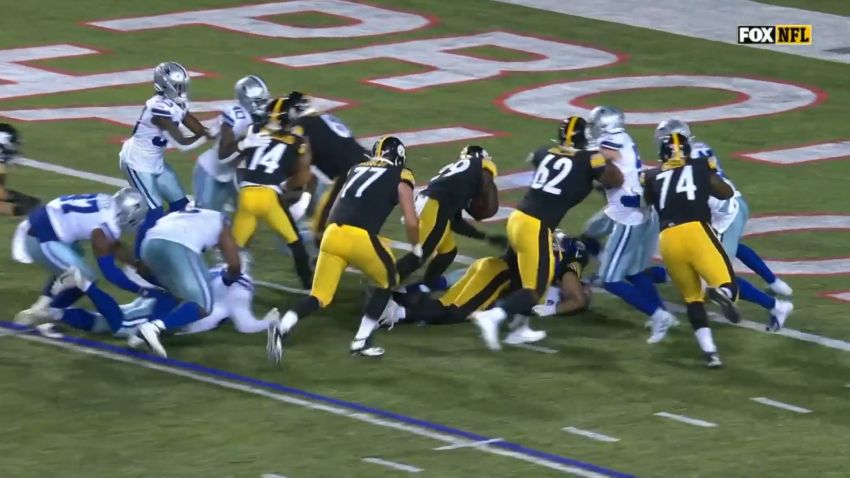 You could quite easily make the case that nobody on the Pittsburgh Steelers’ sideline helped himself more tonight against the Dallas Cowboys than veteran running back Kalen Ballage, who is competing for a roster spot, and a role, within Pittsburgh’s depth chart. He was the most active player on offense, and scored the first touchdown of the season on some power running from several yards out. If it wasn’t him, then it would have to be Pressley Harvin III.

Signed as an outside free agent, Ballage was brought in to give the Steelers more options as they explore ways improve their running game, the most significant move, of course, having been to draft Najee Harris in the first round out of Alabama.

Though the team parted with starter James Conner, they still brought back Benny Snell, Anthony McFarland, and Jaylen Samuels from last season. Snell is currently sidelined with an injury, however, helping to provide Ballage with even more opportunities.

While his four-yard touchdown run was his most significant play, he also successfully converted on fourth and one, and I’m sure I don’t have to remind you how significantly the Steelers have struggled running the ball in short-yardage situations over the course of the past couple of seasons. He also showed some ability to get out to the edge.

“Good-finish, high-energy big men is gonna be a catalyst for our running game”, head coach Mike Tomlin said after the game, “and really, our football team”, though he did say that Ballage left the game with a lower body injury, so that will have to be assessed.

A former 2018 fourth-round draft pick of the Miami Dolphins, Ballage is already on his fourth team, having split the 2020 season with the New York Jets and the Los Angeles Chargers. Over his first three seasons, he totaled 629 rushing yards on 201 carries with seven touchdowns, but his 3.1-yard career rushing average obviously sticks out.

It remains to be seen how many running backs the Steelers will carry on their 53-man roster this year. Last year, they did carry four, with McFarland as a rookie and Samuels seeing little time. This year, it seems likely that Samuels is on the outside looking in, but Ballage and Snell could be competing for one roster spot if the team decides to carry only three halfbacks, along with fullback Derek Watt.

Snell was a fourth-round pick in 2019, and has had his ups and downs in his young career, with a few strong games when he has had an opportunity to accumulate touches. The team does seem to like him, but it’s not impossible that they favor Ballage, if there aren’t enough roster spots to go around.