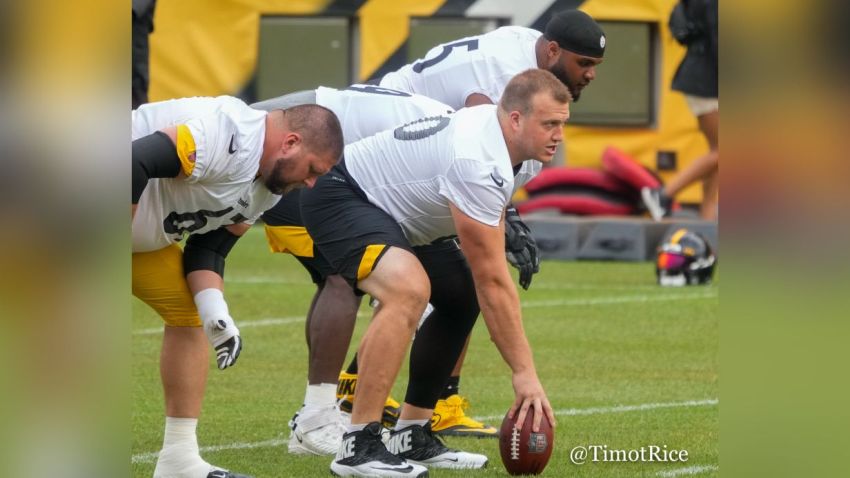 There is a new car smell to this offensive line because the Steelers are trading in the classics for something new with less mileage all along the offensive line. The interior section of the line is going to look a lot different with Maurkice Pouncey retiring, David DeCastro released and Matt Feiler moving on through free agency. There will probably be 5 IOL on the 53 man roster.

Kevin Dotson has the inside lane to the left guard spot and got important reps in his rookie campaign. He was a starter in 4 games and received offensive snaps in nine total games for a total of 360. He looked the part in every chance he got and projects to be a long time starter.

The Steelers drafted Kendrick Green in the third round with the hope that he will eventually be the starter at center and that role may come sooner rather than later.  He played guard and center in college and has an aggressive demeanor that fits what the Steelers want to do in the running game.

Replacing DeCastro will be veteran Trai Turner.  A veteran player and former Pro Bowl participant that battled injuries in 2020 that led to him playing just 9 games. That also led to him being cut by the Los Angeles Chargers in March.

For the fourth player I am going to put Rashaad Coward. He is entering his 5th season in the NFL and his first in Pittsburgh. He had spent his previous years with the Chicago Bears and has played in 30 games with 15 starts.  He can play guard or right tackle and would backup both guard positions.

B.J. Finney – After spending a forgettable season away from Pittsburgh he was brought back this year to battle for the starting center position. He is entering his 6th season in the NFL and has played in 66 games with 13 starts all with Pittsburgh.  He has experience at both guard and center with over 1,000 snaps on offense and 229 on special teams.

On the positive side, the coaching staff is familiar with him and his body of work.  He is a veteran with solid starting experience. He has position flexibility to play either guard or center. If he doesn’t win the starting center position he has a 50/50 shot to be the backup.

On the negative side, he is coming off of season where he showed up to camp heavier than normal after struggling with his training due to Covid restrictions. He didn’t play an offensive snap with Cincinnati or Seattle and was active for just seven games and inactive from week 11 on.

J.C. Hassenauer – He is entering his 3rd season with Pittsburgh and coming off a season when he got his first NFL experience.  He too will battle for the starting center position.  He also can play center or guard and was active for 15 regular season games and the playoff game.  He started 4 games and saw offensive snaps in 10 total games.

On the positive side, he was the backup center all last season and received over 300 offensive snaps. His primarily a center but can play guard as well.  He too has a 50/50 shot to be the backup center and is the younger than Finney.

On the negative side, he is undersize compared to Finney and has below average length.  He was credited with one fumble on a poor shotgun snap.  In 2020, he was called for 3 offensive penalties (1 holding, 2 ineligible man downfield) with 2 being accepted for 15 yards. He is also dealing with a knee injury early in camp.

Anthony Coyle – A former undrafted free agent who was added to the practice squad in September of 2020 and was elevated as a protected player several times last year but didn’t see any game action. He did get playing time in the XFL with the New York Guardians. He played tackle in college and is listed as a guard on the initial depth chart.

On the positive side, he is the youngest of the group and has professional football experience.  He has guard and tackle flexibility. The Steelers liked enough of what the saw to protect him several times late in the season. He showed some aggressiveness early in camp.

On the negative side, he has no NFL game experience. There are a lot of new players that were brought in via the draft that he will have to battle to make the team.  The Steelers are his fourth team after initially signing with Houston and then stops in Green Bay and then Atlanta. He suffered a stinger early in training camp.