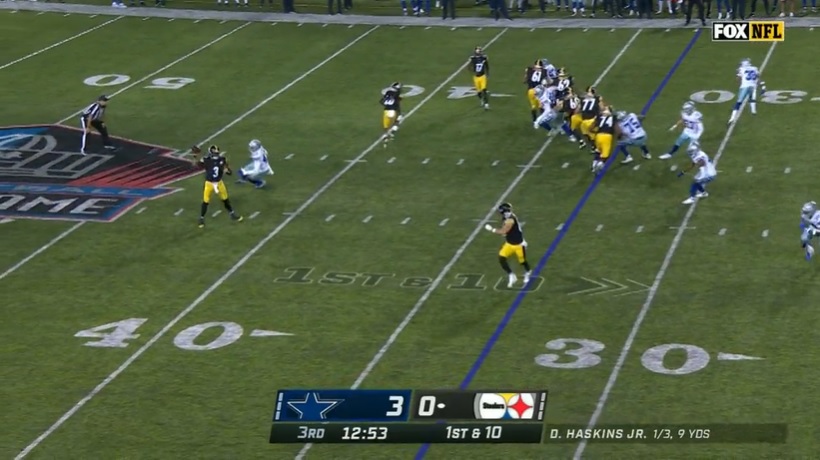 We got a look at a lot of “new” Thursday night. The first game of the 2021 season. The first look at this year’s rookie class. And it was the first chance for Matt Canada to call an NFL game. His stamp on the Steelers’ offense was evident against the Cowboys.

Canada’s offense is designed to get its QB on the move one way and the defense moving the other. At its core, an offense that looks the same at the snap with multiple options the defense can’t respond and react to until it’s too late.

A great illustration of that came three times in the second half of the preseason opener. Three boots to the boundary (short/closed side) of the field off a fake jet and wide zone action. Let’s break it down.

This one came on the Steelers’ first play of the second half. From a reduced split, WR Isaiah McKoy runs across the formation on jet motion. Haskins fakes the handoff to him and then fakes the handoff to RB Trey Edmunds on this split zone action, the off-ball tight end pulling across.

Haskins rolls to his right, the boundary, and hits the tight end coming acorss the field. The defense is moving the other direction on the jet and handoff, leaving TE Kevin Rader open in the right flat. Haskins is able to avoid the unblocked EMOL (the LOLB – normally blocked by the TE on a run) and hit Rader in the flat for a 15-yard gain and first down.

Next drive. Same concept. Jet motion by Anthony Johnson and Haskins fakes the handoff to Kalen Ballage. Defense flows that way and Trey Edmunds leaks out to the left side. Little better defended here and Edmunds isn’t exactly a great athlete but it’s a solid gain on first down of five.

Finally, the same look in the fourth quarter. Tyler Simmons coming across – not even much of a fake here but the defense can’t see the ball and they have to respect the threat of being out-leveraged to the perimeter if they don’t play the jet – with the fake to Jaylen Samuels.

Josh Dobbs rolls to the boundary and Edmunds leaks out across the formation. Wide open for a 17-yard gain down the left sideline.

All three of these bootlegs came on 1st and 10 out of 12/21 personnel. Run downs and groupings for the offense/defense. There’s so many moving pieces in this offense and so many variants. And Canada showed that earlier in the game.

On their first possession, the Steelers ran this concept the second play of the game. Chase Claypool jet motion with the ball going to Najee Harris on an inside zone run. Kevin Rader pulling to kick out the EMOL here instead of working to the flat for a pass.

Later on the drive, Mason Rudolph attempted to hand the ball to Claypool on the jet motion. The handoff seemed late and fumbled but you get the idea. The goal was to hit Claypool on the perimeter. This came on 2nd and 3, not 1st and 10, but still a run-down.

In these five clips, you’ve seen all the variations of this play. The handoff to the jet player, to the running back, and boot after faking both to hit the FB/TE.

As a defense, you don’t know which is coming. Everything looks the same. Maybe you can tell if it’s going to the jet player or not if the timing of the snap is off. But the run or playpass? Really hard to do. You’ll be a step slow, out-leveraged, and chasing the ball every time.

Canada’s offense will be built off that. A core set of personnel groupings and formations with tons of constraint plays and options off it.

The biggest worry on the boot is Ben Roethlisberger having the mobility to run away from and deal with pressure. There will be times where that unblocked EMOL will be in his face, just as Haskins had in that first clip. But ideally, the defender needs a half-second to find the ball and if the TE is open, it’s a quick throw and completion. These boots also take away half the field and have two options, a lo-hi read from the flat to the second level crosser/over route. But if the defense covers it well, the play is busted just as it begins.

I’ve seen this play in camp a ton and Mike Sullivan has QBs work on this boot action early in practice almost every day. Expect it to be a staple playaction concept in the Steelers’ offense.