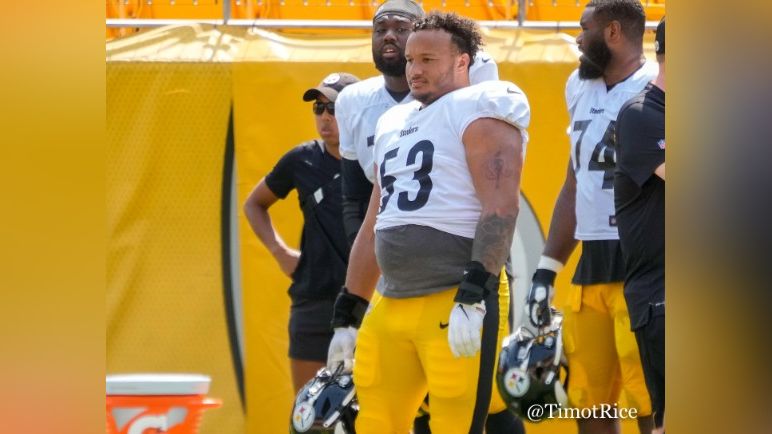 Saturday night’s game against the Detroit Lions was the first time in the preseason the Pittsburgh Steelers projected starting offensive line would take their first snaps together as a unit. One of those projected starters, rookie C Kendrick Green, has been a mixed bag of praise and criticism thus far this preseason, and that trend continued against Detroit. Prior to the game, we have seen moments where Green shows off his superior athleticism and movement skills for a man of his size, effortlessly climbing to the second level of the defense to pick off linebackers in the run game and even pick up defensive backs in the secondary.

We have also seen Green’s weaknesses, specifically as a pass protector in regard to losing against power rushers due his lack of size and length at the center position.

Believe me, these instances were just as apparent in the Lions game as they were in the previous game against the Eagles. Here on the second offensive drive of the game, we see Green get walked back after the snap by the nose tackle from Detroit, taking the long arm to the right shoulder and gets pushed right into #7 Ben Roethlisberger’s lap as he lets go of the football. Alex Kozora has mentioned numerous times that Green has struggled against power rushers that get inside his chest and take him for a ride in training camp practices, and this rep tells a similar story.

Many will reference the third down pass attempt right before the half in the red zone where #88 Pat Freiermuth was going for his third Touchdown on the night where Green lost bad on this pass protection rep, striking with his right hand but doesn’t react to the defensive tackle’s swim move over his right shoulder, getting past him easily and gets right into the face of #2 Mason Rudolph as he lets go of the pass, short-arming the throw to the TE over the middle on the incompletion.

Here is another rep early in the second quarter where Green noticeably gives ground in pass protection, but does a better job fighting to stay engaged with his arms extended against the defender and digs his feet into the ground, halting the rush just enough for Rudolph to complete the pass to #85 Eric Ebron for the first down.

There is no denying that Green can and will struggle with size and power on the inside in pass protection at the NFL level. He just doesn’t have the arm length or mass to stone wall defenders 20lb bigger than him in place that get inside his chest and underneath his pads. However, context is needed when watching all of Green’s reps in pass protection. There were several instances where Green did a great job locking on and staying with his man like on this rep below, keeping his hands inside and playing with good leverage to control the defender through the entire play.

Here’s another play where Green handles the long arm attempt by the defensive tackle well in pass protection, getting his hands inside the defender’s chest and does a good job stopping forward momentum against the rush. Green definitely is best suited for pass protection purposes operating in a phone booth with support with a guard on either side of him but does have the overall strength to hold his own against pass rushers on the inside as long as he doesn’t lose to the long arm initially and get knocked back.

In fact, Green can be an asset in pass protection when tasked to double team a defender with a guard. As I mentioned in my scouting profile on Green coming out of Illinois, he has his head on a swivel in pass protection and is constantly looking to put a body on a defender. Case-in-point here on this rep where Ben Roethlisberger throws his first TD pass to Pat Freiermuth where Green aids LG #69 Kevin Dotson by escorting the defensive tackle out of the play and seals him off again with his backside to keep Ben clean in the pocket as he locates Freiermuth for the TD strike.

While Green may be seen as undersized for the center position, don’t let that confuse you for thinking that he is weak. The dude has videos out on social media of him squatting 700lb back at Illinois and that strength is just as evident on film. Here on one of Ben’s first completions of the game to #22 Najee Harris, we see Green shove #54 Alim McNeill off of his spot nearly five yards away with a big punch. McNeill is no small man at nearly 320lb, and Green displaces him with relative ease.

Now if you want to see Green’s strength on full display, just watch what he does in the running game. The man is a bowling ball that has a compact frame combined with the nasty demeanor to run through someone’s face and put them on their backside. We see Green do that to a tee on this run by Najee Harris, hitting a combo block with #51 Trai Turner on McNeill and then breaks off to the linebacker at the second level, getting inside his chest and runs his feet on contact, eventually overpowering the linebacker and plants him on his backside for the pancake block.

There were plenty of instances on Saturday night against the Lions where Green displayed nastiness and power in the run game, playing to and through the whistle and proudly putting defenders into the ground. One example comes on this run to #26 Anthony McFarland Jr. that doesn’t result in a huge gain, but yet we see Green pick up the linebacker when he climbs to the second level, knocking him off-balance and then proceeds to take him completely out of the play and takes him to the ground in the backfield as the play concludes.

Overall, I do recognize that Green has his warts in pass protection and will need to become savvier as a blocker against power rushers to avoid getting benched pressed into the lap of the quarterback. However, much like Alex Kozora broke down Chukwuma Okorafor’s performance against the Eagles last week, Green’s performance this week against the Lions needs to be taken into context as well.

There were plenty of reps where Green more than held his own in pass protection when on an island against nose tackles and several instances where his effort in looking for extra work in pass protection helped lead to big plays. His nastiness and mindset as a run blocker were evident, showcasing the combination of athleticism and strength Pittsburgh had envisioned when drafting him to revamp their rushing attack. Personally, I was pleased with Green’s performance Saturday night and look forward to paying close attention to his development throughout the season.

What are your thoughts on Kendrick Green’s performance Saturday night against the Lions? Do you think that he struggled mightily in pass protection and that the team should keep their eyes peeled for a free agent that could come available before the season? Or do you agree that he played a pretty good game and will be fine as the Steelers starting center in 2021? Please leave your thoughts in the comments section below and thanks again for reading!