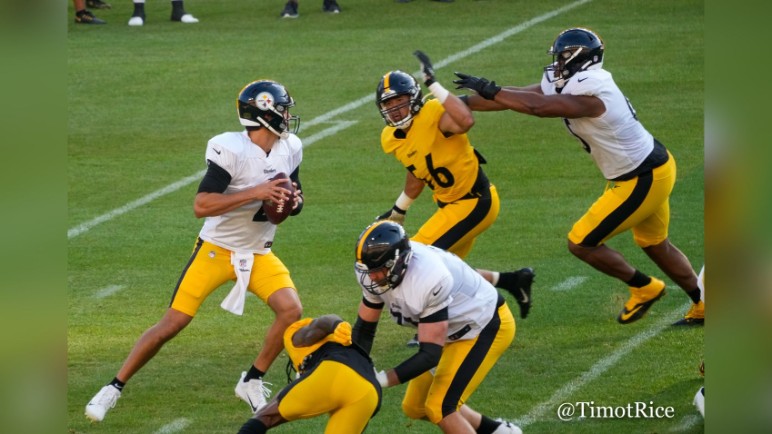 Been excited to write this post for awhile now. With us back at Pittsburgh Steelers’ training camp for the first time in two years, we can bring back training camp stats. It’s all based off our play-by-play from our daily diaries. Now, I’m able to compile all the info there and spit out some numbers. They’re not the end-all, camp stats are about as nerdy as it gets, but it puts perspective on what we’re seeing and lets us know if the numbers and our eyes are matching up.

Lot to talk about so let’s break it down. Here are the QB numbers from the first four days of public practices. We did, obviously, miss the first couple that were closed to the public. But we’re making due with what we have. This is info that of course doesn’t exist anywhere else in the world.

For QBs, we’ve also been able to calculate completion percentage, yards per attempt, and yards per completion.

Some takeaways. Haskins with the most impressive numbers. TDs can be a little weird and skewed by 7 shots chances, but Haskins has also led scoring drives in each of his two-minute drills. He’s consistently pushing the ball downfield but also not making poor decisions and fitting the ball into windows that aren’t there. His first INT was a rough one to James Pierre yesterday, but the second came off a drop by Zach Gentry.

Rudolph’s numbers have the look of a Checkdown Charlie. To be fair to him, he had a 60-yard TD dropped by JuJu Smith-Schuster. But even if we pretended he caught that, his YPA would only improve by about a yard and still be two yards behind Haskins. Roethlisberger hasn’t had many completions downfield, either, but his reps have been much more limited with his half and off-days.

He’s the only QB not to have an INT in the four practices we’ve tracked (he did have at least one to Antoine Brooks Jr. earlier in camp). Dobbs is driving the ball downfield too but could easily have more than one INT. Made some dangerous throws but with limited reps, he’s gotta take chances.

Here are their completions of 20+ yards.

Numbers are reflective of the eye-test. Haskins is utilizing that big arm of his.

I’ve taken this year’s stats one step further. Caveat is these numbers may not be 100% accurate but they’re about 95%. I am able to track QB reps based off my notes, if you’re into that kind of thing. Here are the total reps. Next to the total for each QB is the daily practice reps, 1-4.

This way, we can really get a feel for how many snaps these QBs are getting. And noting if there are any changes between say, Haskins and Rudolph if there is a battle for that #2 spot.

Haskins and Rudolph’s reps have been very even. Generally, the top-three QBs will get four snaps each team session (12 plays total per 11v11 period). The only changes can be one more/less in seven shots and how effective their two-minute drives are. Rudolph has still run ahead of Haskins in every team session so far. If that changes, it’ll be notable. And we’ll let you know. But Rudolph is still functioning as the #2.

And Dobbs…yeah, there’s just no reps to go around. He needs Roethlisberger’s off-days to get anything substantial. That was the 18 he had on Day 3, Friday night lights. Just ten total reps (not just passes but snaps) on the other three days combined.

– Harris leading the team in carries. Some poor blocking has brought his numbers down a bit but he’s run well, showing power, elusiveness, and creating behind the line (especially yesterday). Ballage being second in carries is a little bit notable, though word of warning. RB carries in camp don’t always equate to making the team. McFarland by far has the best YPC thanks to a 40-yard run he had the other day. Snell’s score came in seven shots. Only two of his eight carries have gone for more than three yards.

Ballage has two that went for nine.

– Rico Bussey had that one big practice, making him the camp yards leader and currently the only Steeler over 100 yards.

– Chase Claypool catches and plays have almost entirely come in seven shots. Jump-ball machine, three TDs, but a very low yards-per-catch (4.5). Nothing I’m worried about, though.

– Very quiet start for James Washington. Dax Raymond has more catches than him.

– Najee Harris leading all RBs in targets with ten.

– Nice numbers for Kalen Ballage and Anthony McFarland. They’ve shown good hands and ability to adjust outside their frame. Ditto for Pat Freiermuth and Zach Gentry while Kevin Rader has made several tough grabs (even on one of his incompletions).

Harris leads the team with three, including two yesterday. Dreadful day for the whole offense. Eight of them total and maybe even a ninth I didn’t count against Diontae Johnson. Yesterday, Harris had two, Rader had one, Gentry had one, Washington had one, Claypool had one, Johnson had one, and Sexton had one. So eight of their 13 total camp drops (61.5%) came yesterday. Tired group in need of a day off, I think. Not really worried about any of these numbers but worth passing along.

Both of Pierre’s picks have come in seven shots the last two practices. Interesting that five of the six INTs have come from rookies or second-year players. Fitzpatrick is the only exception. Some young guys being aggressive, capitalizing on their chances.

If there’s any other stat you’re looking for, let us know in the comments below. We’ll update these on Wednesday after the next two practices.