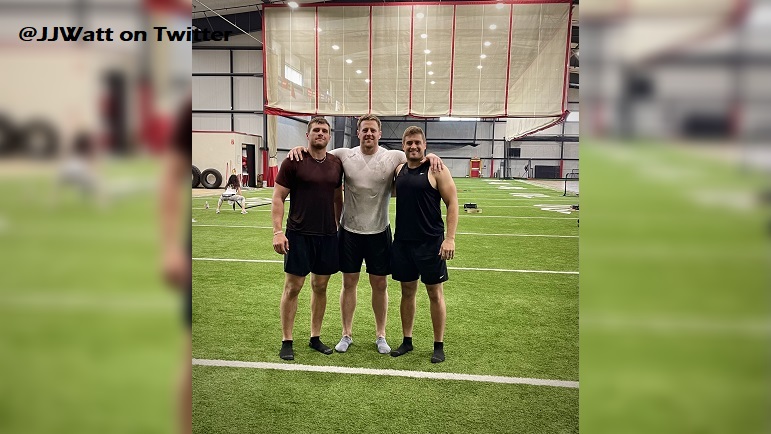 The Pittsburgh Steelers will begin their annual training camp later this week and most of the other NFL teams will soon follow suit. Ahead of that event, the Watt brothers appear to be ready for their respective training camps to get underway as evidenced by several social media posts that were released on Monday.

On Monday, J.J. Watt, the oldest of the three brothers, released several pictures on Instagram that include his two younger brothers, T.J. Watt and Derek Watt, both of the Steelers. J.J. Watt is now a member of the Arizona Cardinals as of earlier this offseason.

The Watt brothers have used Brad Arnett as their family trainer for quite some time now. He trains all three Watt brothers at his Pewaukee, WI area gym and has been working with them since they’ve been in high school. As the pictures show, all three of the brothers look to be in top-notch shape as they prepare for training camp to get underway.

Below are pictures of T.J. Watt from when he participated in the 2017 NFL combine and thus prior to the Steelers drafting him in the first round that year.

Sunday night on Twitter, Watt also posted a picture of himself and some of the members of the team’s the defense. He captioned the tweet, “Coming Soon …”

Watt will be looking to build off his great 2020 season that included him leading the NFL in sacks (15), tackles for a loss (23) and quarterback hits (41). Despite leading the league in those three major defensive statistical categories, Watt still finished second in Defensive Player of the Year voting. He lost to Los Angeles Rams defensive tackle Aaron Donald.