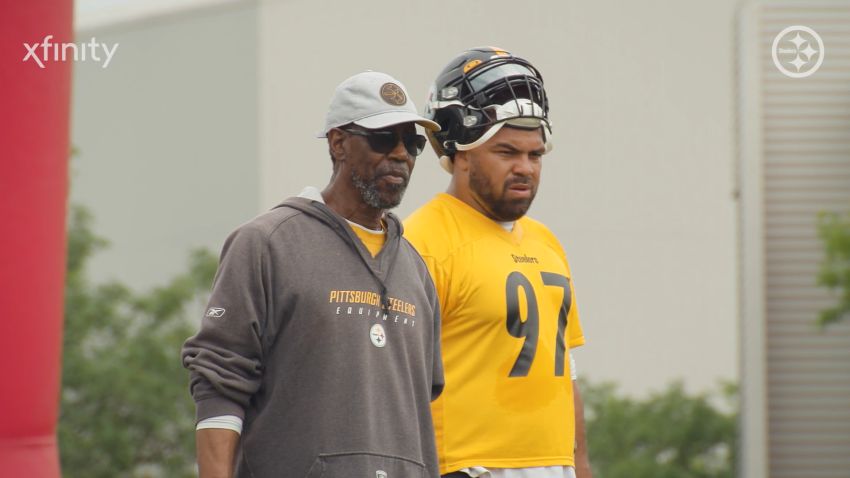 There is being a veteran, and then there is being a leader. Cameron Heyward has been voted as a team captain by his peers for the Pittsburgh Steelers for years now. He is the longest-tenured defensive player on the roster, but it’s not simply his longevity within the organization that makes elevates him to that status.

Frankly, it’s what he does when we’re not looking that counts the most, which is usually the case. We don’t ordinarily get a glimpse into Spring drills, but the latest installment of The Standard documentary series on the team’s website gave us just that, including an illuminating extended mic’ed up segment with Heyward, showing just how much he works with the rest of the roster—including the offense.

Entering his 11th season, Heyward is quite accomplished in his own right, currently on a four-year Pro Bowl streak. But he has a greater sense of the whole over the self, and understands that bettering the team is bettering everybody.

We see in the video how he embraces every opportunity to instruct, to imbue others with his accrued wisdom, no matter who they are—whether it be Jamir Jones, Jarron Jones, Pat Freiermuth, Isaiahh Loudermilk, or any number of players.

“Violent hands! Violent hands!”, we see him shouting at one point in the video, standing side by side with John Mitchell, the team’s assistant head coach, and longtime former defensive line coach, though we also see clearly that he maintains an on-field role as much as he can get away with.

At other points in the segment, we watch Heyward giving tight ends details on some of the finer points of working as the end man on the line for the field goal kicking unit. He’s challenging second-year defensive lineman Carlos Davis, over and over again, to a get-off drill. “You gotta stay ready at all times”, he tells him. “Let’s go! Lock in!”.

There are some players who simply transcend athlete when it comes to their role within the organization. Heyward has felt destined to be such a player from the day he was drafted, 31st overall in the first round of the 2011 NFL Draft. And he’s lived up to every ounce of his potential.

That’s why he’s been one of the rare players awarded with multiple long-term extensions, currently under contract through the 2024 season, at which point the would be 35. He’s still a high-level performer on the field, but what he offers is so much more, and we only get hints of it here and there, so this piece was a welcome opportunity to see just how seriously he embraces his role as leader.

The fact that he calls Alex Highsmith ‘Dawson’s Creek’ (he appeared on the show as an infant, obviously unbeknownst to him at the time) is just the cherry on top.