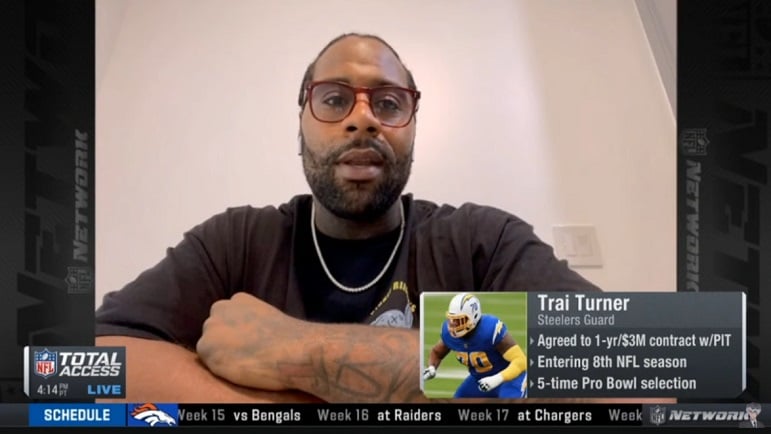 Before missing nearly half of the season a year ago, former Carolina Panthers and Los Angeles Chargers right guard Trai Turner developed into a perennial Pro Bowler, earning such distinction five years in a row, from his second season in 2015 through the 2019 season, even though he’d missed at least three games each year from 2017-19.

His play suffered through injuries in recent years, however, especially last season. He spent this offseason rehabbing from yet another injury before recently signing a one-year deal with the Pittsburgh Steelers to replace David DeCastro. He recently talked about getting back to Pro Bowl form during a sport on Total Access on the NFL Network.

“I’ve been working out with Jackie Slater. We’ve been working out in Orange, California”, he said, “kind of set up shop out there for basically my own personal minicamp or OTAs, if that’s what you want to call it. I didn’t sign until recently so I had a little bit of time to take advantage of like skills that I knew I specifically needed to improve on, and just make sure that the body is healthy and, getting mentally refreshed”.

“I think that was one of the key components in coming into a season ready to go”, he added, “especially with this extra game added, just mental clarity on everything and, man, I can’t tell you how excited I am just to go out there and ball and have fun”.

Having only turned 28 just a month ago, Turner still have something left in the tank even as he heads into his eighth NFL season. He still has the capability of being a dominant player, with his biggest obstacles being healthy and consistency.

Meanwhile, he enters an offensive line in transition, a unit that returns no players from last season who started more than two games for the Steelers a year ago at the positions they will be playing this year. Chukwuma Okorafor started 16 games last year, but all at right tackle. He has never played his presumed new position of left tackle in a meaningful game before.

Likewise, Zach Banner started one game at right tackle and Kevin Dotson two at left guard (four in total. Turner, of course, wasn’t here last year, while Kendrick Green, the anticipated starting center, is only a rookie after being selected in the third round.

Turner is the grizzled veteran of the Steelers’ offensive line room now, even though he’s just gotten here and hasn’t even worked with any of his teammates before. Banner and Okorafor are going into their fourth seasons in Pittsburgh, while B.J. Finney has spent most of his six-year career here, but none are proven starters on the field. They’ll all have to find a way to come together.