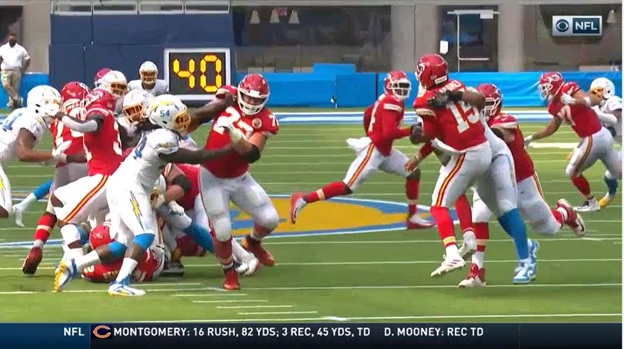 Ah, the NFL injury report.  When a player is injured, sometimes every detail is shared by league insiders (to the point of releasing hospital records, fascinating but not a great look).  Other times, it’s almost as vague as the NHL terminology of “lower body injury”.  And when it comes to extremities, the injury reports almost never indicate which side is affected.  Beat reporters sometimes know more than they can tell because it’s told to them in confidence or the information can’t be confirmed.  And while some athletes are very up front about the injuries they sustain, others play it close to the vest.  Every Steelers fan who has watched a Tomlin Tuesday knows how little the Head Coach likes to share details when his players are hurt.

You don’t want to know how much time I spent combing through articles, interviews and blog posts to figure out what exactly was wrong with former Chargers/newly signed Steelers edge rusher Melvin Ingram.  Came up empty.  Every report was simple “knee”.

Fortunately, we have our eyes and the game film.  So while I am making some educated guesses here, it will allow us to consider what Ingram’s exact injury was and what to expect from him this season.  Here we go!

Ingram started the 2020 season healthy after a brief “hold in” during training camp to secure more guaranteed money in the final year of his contract with the Los Angeles Chargers.  In the Week 2 matchup versus Kansas City, a division rival, the Chargers blitzed Patrick Mahomes on 3rd and 9 with just a little over a minute left in the first half.  It was RDE Uchenna Nwosu who got to the QB but Ingram’s pressure was a factor in the play.  He came up short at the end of the play, instinctively grabbing his right knee.  He dropped to his left knee part way off the field, clearly in pain.

What we know is that the Chargers placed him on IR, able to bring him back in just three weeks due to the new Covid IR rules.  He wound up missing 5 weeks, returning to face the Broncos in Week 8.  Ingram started three games before landing on IR once again and his season was done.

Let’s start with the original injury.  Here’s the entire play:

As Ingram turns the corner, you can see his right knee bend medially a little:

Doesn’t really look bad but that seems to be the moment he sustained the injury.  So what happened?

We know it wasn’t an ACL tear because he would have had season-ending surgery.  When the knee bends in like that (called “valgus” in medical terms), tension is being placed on the medial structures of the knee: 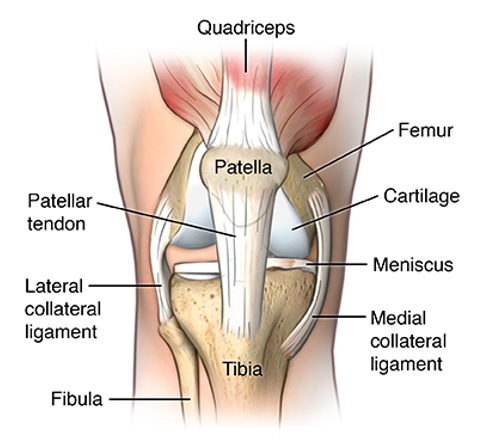 We talk about MCL injuries a lot because it’s the most common knee injury in the NFL.  This most definitely could be an MCL sprain that Ingram suffered.  Another consideration is a patellar tendon strain.  Both would have been treated without surgery and both would have allowed a return during the season.  Let’s take a deeper dive (don’t worry, I won’t get too nerdy here).

I’ve talked about MCL sprains a lot because it is such a common injury in the NFL.  In case you need a refresher, here it is: 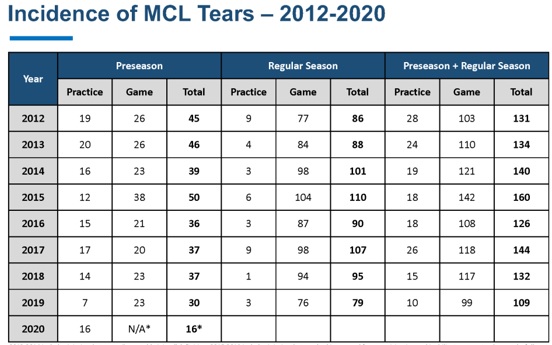 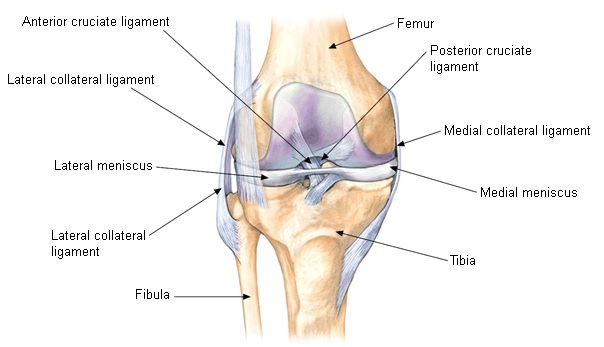 The MCL provides stability to the middle side of the knee, particularly when the knee is flexed.  A sprain is a stretch and/or tear of a ligament, and it is classified by severity.  The MCL consists of superficial and deep ligaments. The superficial MCL is the primary restraint to valgus laxity at the knee. The superficial MCL has 1 attachment to the femur (thigh bone) and 2 attachments to the tibia (shin bone). The deep MCL is a thickening of the medial joint capsule and runs deep and parallel to the superficial MCL.

Here is the breakdown, courtesy of the American Academy of Orthopaedic Surgeons:

The other way to measure MCL grade is by the amount of medial joint gapping when a lateral force is applied during physical examination:

It always starts with the basic RICE treatment: rest, ice, compression (with a brace), and elevation.  Pain can be treated with anti-inflammatory medication like ibuprofen and sometimes narcotics like Vicodin.

WHAT IS THE RECOVERY TIME FOR NFL LINEBACKERS WITH MCL TEARS?

Virtually all MCL tears heal without surgery unless there is an associated meniscal tear or another ligament is also injured.  Return to play depends primarily on the severity of the tear but the position played is a factor as well.  QBs and linemen can sometimes return faster than RBs, WRs, DBs and LBs, who do more cutting.

Looking at a few linebackers who have sustained MCL injuries recently shows some variability in the number of games missed:

And as Steelers fan may recall, star LB Ryan Shazier suffered MCL injuries in his rookie season (2014) and again in 2016.  Both were considered Grade 2 tears.  In 2014, he missed 4 weeks.  In 2016, he returned after 3 weeks, which turned out to be too soon.  He missed another game the following week and then returned after the bye week.

Back to Ingram.  The mechanism of injury and the timing of his return certainly fits with a Grade 2 MCL sprain.  Assuming that this is not a Grade 3 sprain, Ingram would not have needed surgery and should be fully recovered by now.

The patella (kneecap) joint is part of the fairly complex junction of the femur (thighbone) and lower leg bones (tibia and fibula).  It is attached to the bones by ligaments.  The medial patellofemoral ligament (MPFL) originates on the medial prominence of the lower femur and attaches on the upper medial surface of the patella and helps to stabilize the medial aspect of the knee.  A sprain to this ligament is one of the four most common knee injuries in the NFL.

A sprain to the MPFL can occur during acute subluxation or dislocation of the patella, which typically occurs with the knee in flexion and valgus (take another look at the screenshot of Ingram’s injury and this certainly fits the bill).  Here’s a great review on knee dislocations and MPFL injuries from orthopaedic surgeon Dr. Howard Luks.

If Ingram did sustain an acute patellar dislocation without any ligament injury or with a partial tear, he would have been able to recover and return to play.  Remember Chiefs QB Patrick Mahomes in the 2019 season?  He bounced right back from his patellar dislocation, leading his team to a Super Bowl victory.

Most first time patellas dislocations are treated with immobilization initially and then gradual increase in activity.  A more severe MPFL tear would require surgery, and the recovery is 6-10 months.  So we can assume that wasn’t the case for Ingram.  Recurrent dislocations also require surgery to repair the ligament, which in that case is not able to keep the patella in proper position.

My guess is that Ingram suffered an MCL sprain and reaggravated it 3 weeks after his return.  There was never an obvious event in the Jets game which marked his final plays with the Chargers.  I went back and watched the whole thing (Joe Flacco throwing for DPI flags just like the good old days with the Ravens) and Ingram looked fine, even scooping up a forced fumble on a sack by Joey Bosa and scampering to the endzone in the fourth quarter which was unfortunately overturned by the zebras for an imaginary roughing the passer call.

If I’m right and the season-ending injury was a Grade 2 MCL sprain, Melvin Ingram should be fit and ready to go as the Steelers begin training camp today.  And even if it was a MPFL sprain, I expect he will be fine, assuming he doesn’t develop recurrent patellar dislocation.  So there’s every reason to look forward to seeing newly signed veteran Melvin Ingram help the Steelers defense get after opposing QBs in 2021.