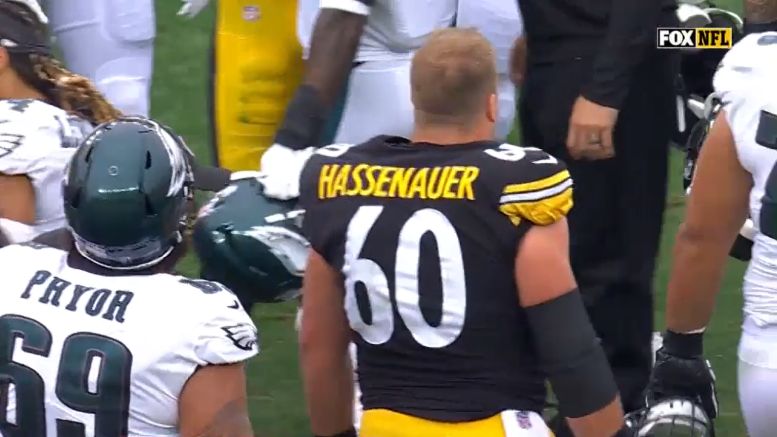 During training camp, there are no official injury reports. So as fans, we only know what we learn from the reporters allowed to watch the practices that are closed to the public…as well as the limited scraps of information we get from the coaching staff. And as any Steelers fan knows, those updates from Head Coach Mike Tomlin are limited.

Yesterday, it was reported that both offensive linemen playing center, J.C. Hassenauer (currently listed as the starter on the initial depth chart) and B.J. Finney, left practice with injuries but were able to “leave under their own power” which means they walked off the field and didn’t need a cart. Rookie Kendrick Green was excused for a personal matter. Finney was back to practice today but Hassenauer was held out. Per Tomlin, he is “day to day” with a knee injury.

Thanks to Chris Adamski, we got a look at Hassenauer walking on the sidelines with the head trainer today:

*-per the official depth chart pic.twitter.com/Y0f9vL3dm0

We don’t have much to go on, but here’s my Sunday speculation for whatever that’s worth:

We don’t know if Hassenauer had an MRI but I would assume that he did. Ironically, when training camp was held in Latrobe we always knew because St. Vincent College doesn’t have an MRI, so there was always a mention of a player heading back to the Burgh for imaging.

He’s wearing a hinged brace, which is primarily to provide medial/lateral stability. There is also a compression sleeve to reduce swelling.

So my guess is that Hassenauer has a grade 1 MCL sprain. While braces are more commonly used for Grade 2 and 3 MCL sprains, the trainers might be taking the cautious route here. Seeing him walk and hearing that he is considered “day to day” makes me lean toward the more minor diagnosis.

Here’s a nice review from Harvard if you need a detailed refresher on MCL injuries.

Hinged braces are often used for therapeutic reasons during recovery, but most players won’t wear them as protection during games. Many studies over the years have shown a decrease in performance with braces, which may be due to decreased blood flow to the muscles from the pressure of the brace or a slowing of movement from joint limitation. And while braces have been shown to decrease or prevent knee ligament injuries during practice, that same benefit hasn’t been shown in actual games. (If you want to geek out, here’s a study where the researchers evaluated the damage to cadaver knees with and without braces based on anterior or lateral forces.)

I hope this is a minor sprain and we will see all three centers back on the practice field soon, but it could be a week or more for Hassenauer. And when he returns to practice, he may have that brace on for protection. I wouldn’t take that as a sign of anything more serious.