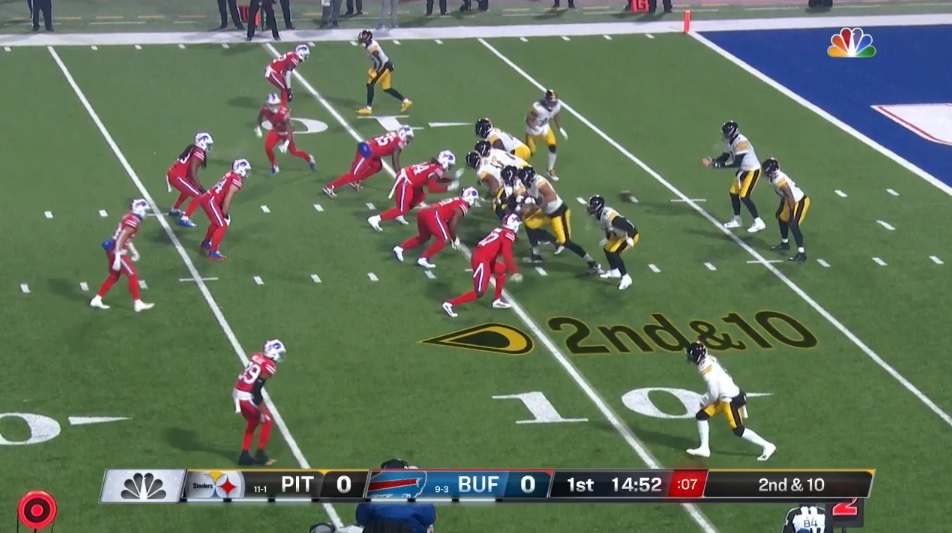 Over the past week, the discussion about Ben Roethlisberger tipping Steelers’ plays has been revived on Twitter. Kicked back up by a TikTok video, it’s worth noting this isn’t new information. It’s something that’s been discussed for at least a year now. But the story’s received much more attention this time.

The premise is this. Roethlisberger is tipping run or pass based on the placement of his back (left) foot. Here are the “rules.”

On a run play, Roethlisberger’s back foot will be flat on the ground.

On a pass play, Roethlisberger’s back foot will be lifted with his heel off the ground.

Ben left foot up on toes at snap… pass

The photos and videos and articles that have been floating around have presented a solid case. But it’s largely just been people eye-balling things. Watching a couple snaps, scrolling through a game, not offering complete context.

So that’s what we’re going to do today. With the help of the Steelers Depot team (many thanks to Dave Bryan, Josh Carney, Tom Mead, Owen Straley, and James Wilford) we’ve charted every shotgun snap Roethlisberger had in 2020 to quantify how much of a “tell” it really is, if there are any exceptions, and what those exceptions are.

We’ll break this article up a couple different ways. We’ll start with the numbers, the run tells vs pass tells, week-by-week and then look at seasonal numbers. Then we’ll see if there are any tendency breakers and get into the tape of those moments. We’ll finish things out with final conclusions.

We’ll start by charting the Steelers’ shotgun running plays. The “tell,” remember, being Roethlisberger’s back foot being flat on the snap of the ball.

Here’s the same data for pass plays. His tell being his back foot being lifted prior to the snap of the football.

Those numbers are…telling. His run tell rate is almost 95% while his pass tell rate comes in just below 90%. That means you can predict with a high degree of confidence if the play will be run or pass based on Roethlisberger’s back foot.

But what are the 10-15% of the exceptions? Nearly exclusively, they are things like RPOs, screens, or shovel/jet plays. Plays like these. They go against the tell but they aren’t “normal” plays like a three-step drop or simple shotgun handoff.

Here’s a collection of them. These go against the grain but are explained because of the option of the play.

Why Is Ben Tipping Plays?

We didn’t chart anything prior to 2020 but just eye-balling past years, this seems to be something he’s done for most, if not all, of his career. At this point, you can just chalk it up to habit and comfort. On run plays, he seems to be keeping his foot flat so he can easier pivot and open up his hips to the running back. Compare these two plays against the New York Giants in Week One.

The first, with his foot flat, has him opening up to RB Benny Snell. The second, with his foot lifted, is a pass. So he’s dropping back without the need to pivot. 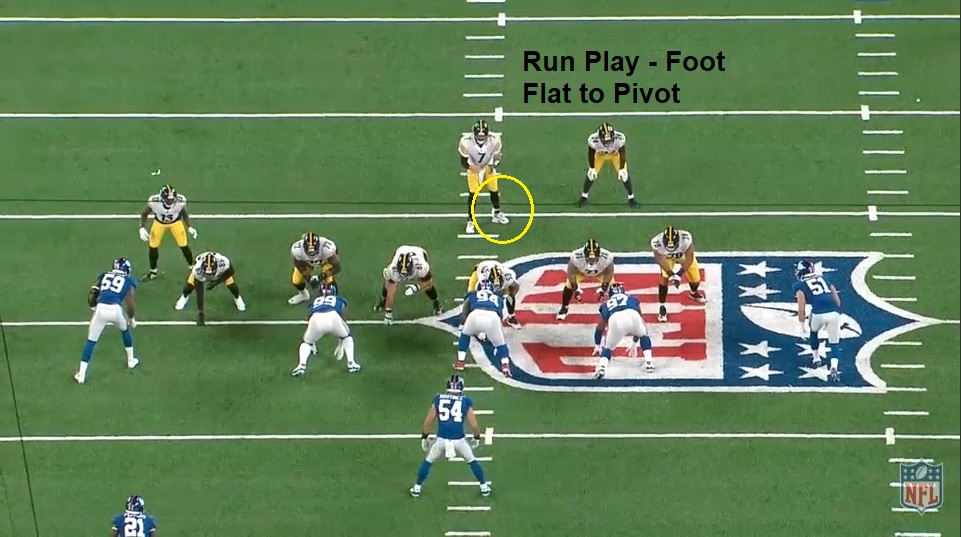 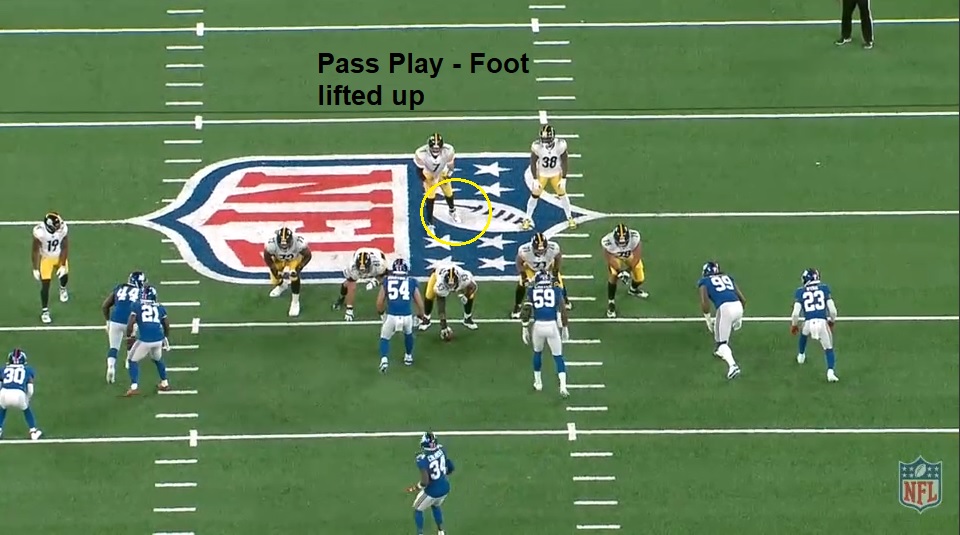 There is a crucial piece of context our data and the photos are leaving out. Most times, when Roethlisberger lifts his foot up on his pass tell, it’s happening right before the snap. His foot lifts and then the ball is snapped. That is a very late indicator for a defense. He’s not keeping his foot up for seconds before the snap of the ball for the entire defense to key in on and communicate.

Like here. The foot comes up right before the snap. In a photo, you can’t discern that information. But you can see it in video. Here’s a montage of them. Not much time for the defense to react.

Remember that defenses have various keys too. They might have eyes on the football if they’re an interior lineman. The ends might be keying the foot/knee of the offensive tackle. The linebackers may be watching the guard to see how the block unfolds. And of course, the secondary isn’t going to be able to see Roethlisberger’s back foot from so far away so this “tell” is of no use to them.

And if someone in the front seven is staring at Roethlisberger’s foot, their eyes will be late on their assignment. So it might not even be worth it. There are other immediate post-snap tells that will tell you pass vs run, like the hat of the linemen (high hat = pass, low hat = run, and the Steelers don’t run playaction anyway so it’s not like they’re fooling anyone).

All of that is to say this. Is this a tell? Yes. The data I think more than proves that. But is it really hurting the Steelers? Not really. It looks much better to discuss after-the-fact when you can slow clips down and take screenshots than the practical, on-field importance.

The best tells are the ones that can be identified well before the snap. A lineman whose leaning back in his stance, suggesting he’s going to pull. A lineman who gives away run/pass keys by being in a two or three-point stance. Bill Belichick once told the story that they were playing the Ravens and had a 100% tell on OT Orlando Brown Sr. If he stood up in a two-point stance, “it was 100% pass.” When he had his hand in the dirt, it was “always running it.” As the story goes, the Patriots scouted it, keyed it, and were ready to use it against the Ravens. Then Brown was named inactive right before the game and their tell went out the window.

Bill Belichick talks about the time in 2004 when preparing for the Ravens, they had a 100% effective run-pass key on Ravens OL Orlando Brown.

They teach it to their players all week, and then an hour before the game they find out Brown is inactive for that game. pic.twitter.com/rorKVeymuo

But that is a tell. That is real, pre-snap information that can quickly be visualized and communicated to the rest of the defense. A lineman isn’t changing his stance like that once he gets set. He can’t, it’s a penalty.

And just because you have a tell doesn’t mean it helps you much. Antonio Brown would famously mess with his gloves on pass plays/plays where he was getting the ball. Defenses knew that. Still didn’t stop him. I’d say Roethlisberger has done pretty well throughout his career with this tell. His “grab the facemask on a hot route” tell was much more obvious and more impactful of a tip than what we’re seeing here.

This is a small sample size but I looked at Mason Rudolph’s Week 17 game against the Browns. Were there similar tells?

On five plays though, the tell was different. Rudolph had his back foot flat on three of eight runs. That’s just 37.5%. Not enough to draw any sort of conclusions from. I suspect if you went around the league with other QBs, you would find some similar correlations. Probably not as strong as Roethlisberger’s but I don’t think this is so unique to him, as Rudolph’s one-game numbers tend to suggest.

Yes, this is a tell from Roethlisberger. To say otherwise is to ignore the tape and the data. But this is something that’s been happening for seemingly his entire career. And he’s a two-time Super Bowl winning, first-ballot Hall of Fame QB who is one of the best to play of his era. It’s fair to say Roethlisberger should do a better job disguising things in 2021, and you know we’ll be watching, but we should all be as unlucky as he’s been to have this “tell.” It’s not the big deal some people think it is and I imagine that’s why the Steelers haven’t made an effort to fix it.