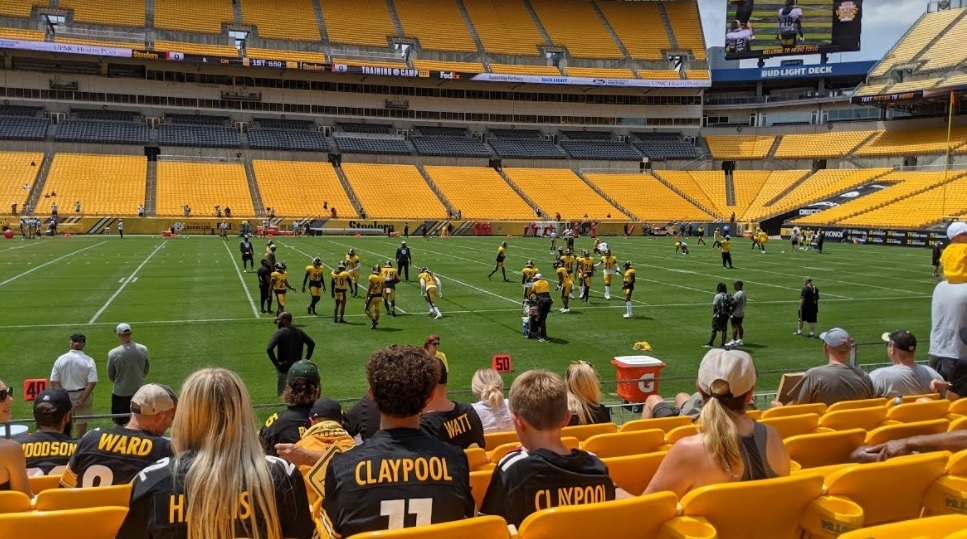 Yesterday marked the first time since 2019 that the Pittsburgh Steelers held an open training camp practice, with several thousand fans (and at least one madman in Alex Kozora) in attendance to witness the team’s first padded practice session of the offseason calendar.

Last year, NFL teams were barred from hosting fans at their training camp events in a measure to help protect everybody during the height of the COVID-19 pandemic. While there are still restrictions in place—their plan to return to Latrobe was denied, and fan interactions are very limited—fans were finally allowed back out there for camp, and it was appreciated in both directions.

“Man, it’s just great. They energize us”, Steelers head coach Mike Tomlin told reporters yesterday about the presence of the Pittsburgh faithful in attendance to watch them prepare for the upcoming season. “It’s just been a tough year for all of us, so their presence is a signal that maybe we’re moving on and out of it, and that’s exciting”.

The team announced that they would hold a total of 12 practices during training camp that are open to the public, so there are still 11 more to go, at least assuming that none of them are washed out, which would likely prompt them to move into an indoor facility.

The 2020 season was extremely weird, for the players perhaps as much as anybody. Most games are played in front of no fans, or an extremely small number of fans. You could very easily hear blimps flying overhead while you’re on the field during afternoon games, which, back in the early portions of the season, former Houston Texan J.J. Watt described as eerie.

Heading into the season, players offered a variety of responses to what they would anticipate it would be like to play without fans. Vance McDonald felt he wouldn’t be bothered by it. Others were pretty concerned about the energy level.

After a year with very few fans, however, yesterday must have felt quite different, even for those who were not here last season. “I thought they brought a lot of energy to us, [with] the music going, good atmosphere”, rookie center Kendrick Green said. “It was good vibes”.

One can only hope that those good vibes translate to the players and their performance on the field. At least for the time being, the plan remains that all stadiums will be capable of hosting fans at full capacity. We are still a month and a half away from that, however, and the situation can evolve over the course of the season.