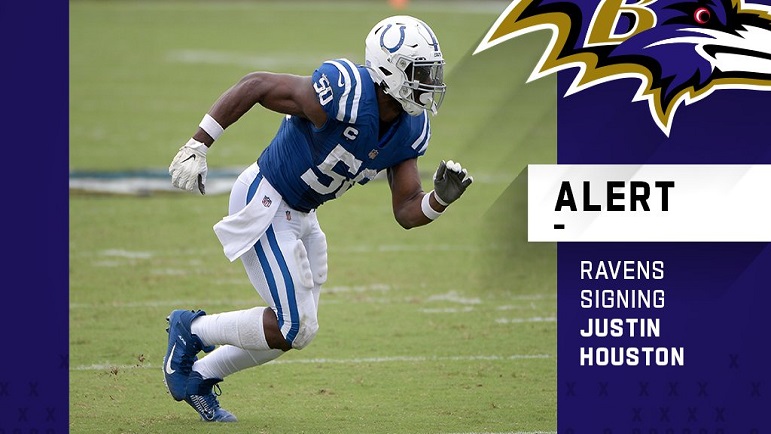 The Baltimore Ravens now have a new veteran edge rusher as of Saturday morning, and it’s none other than Justin Houston, who spent the last two seasons with the Indianapolis Colts.

According to numerous Saturday morning reports, Houston will be signing a one-year, $4 million deal with the Ravens, and taking less money than he was offered elsewhere to do so, according to ESPN’s Adam Schefter.

Former All-Pro edge rusher Justin Houston reached agreement on a one-year deal worth up to $4 million with the Baltimore Ravens, per sources. Houston turned down significantly more money from other teams in order to pursue a championship with the Ravens, per source.

According to Jason La Canfora of CBS Sports, Houston turned down a larger offer from another AFC North team. That report states he reached out to the Ravens looking to sign for less money. Houston reportedly received offers from multiple teams but chose to sign with the Ravens because he believed they gave him the best chance to get his first Super Bowl ring, a source said, per Schefter.

After turning down multiple offers from many teams, including a more lucrative package from an AFC North club, Justin Houston reached out to John Harbaugh this week to convey a willingness to come to Baltimore – his top choice -for considerably less than market. Seems like a fit

La Canfora had reported earlier this month that the Pittsburgh Steelers were one team interested in signing Houston but failed to do so. The Steelers ultimately signed edge rusher Melvin Ingram shortly thereafter. Ingram’s deal, like Houston’s, totaled out at $4 million.

The Ravens lost pass rushers Yannick Ngakoue and Matthew Judon in free agency this offseason. They were, however, able to re-sign outside linebacker Tyus Bowser. The addition of Houston should provide much needed and experienced pass rush production.

Originally a third-round selection of the Kansas City Chiefs in 2011, Houston played his first eight seasons with the team that drafted him. He was selected to four Pro Bowls and earned a First-Team All-Pro designation in 2014 after posting a league-leading 22 sacks.

Houston was productive with the Colts as well after signing with them in 2019. He has recorded 19 sacks and 21 tackles-for-loss over the last two seasons combined. He turned 32 years of age thus past January.