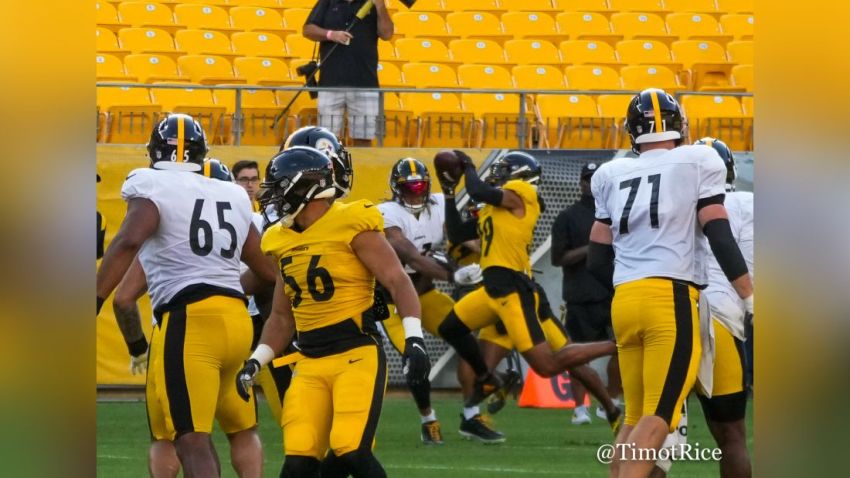 Pittsburgh Steelers quarterback Mason Rudolph had one of those days yesterday during the team’s third open training camp practice, which was highlighted by two interceptions, one returned 107 yards by James Pierre, the other by Minkah Fitzpatrick. And he got the chance to speak to the media after practice all about it.

The first of the two came during the Seven Shots drill, a goal line exercise, during which he was targeting Diontae Johnson on a fade route. He was noted to have stayed after practice, pulling Johnson aside to rep that play over and over.

“There’s things that you want to work on through camp and grab guys, pull them aside for those extra reps”, he told reporters. “Tonight it was a fade, working on the timing, working on a landmark and meeting him there with the ball. Just little things, and at this this time of year, it’s a lot of fun”.

When head coach Mike Tomlin was asked about Rudolph’s extra work after practice, he had a pretty straightforward answer about it. You don’t get extra credit; it’s the job. “That’s appropriate”, he said. “That’s just professional ball. It’s required, to be quite honest with you”.

Of course, that was just the first of two interceptions, and he did credit Pierre with making a good play on the ball, but also understood that the blame was on him, and the throw, and the timing. It might be an easier pill to swallow to be intercepted by a first-team All-Pro safety, but it’s always a throw you want back.

“Diontae was actually in the flat”, Rudolph said of the second pick. “On that one, I probably got too greedy, wanted to force the ball. I was too confident to go down the field, when really you [should] check the ball down to Diontae there in the flat and let him get what he can get”.

At the end of the day, one practice is one practice, and that’s the beauty of it. You can go to sleep, and the next day you have another chance to redeem yourself. And he’ll have to, if Dwayne Haskins is going to threaten to push for his backup job.