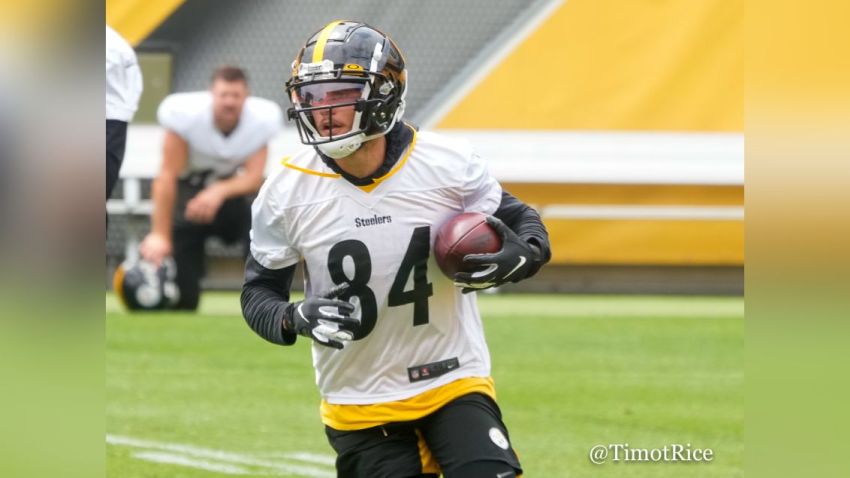 If you were in attendance at Heinz Field Thursday, or following along on Twitter live throughout the day, chances are you kept coming across the name Rico Bussey on Twitter and saw the flashes of No. 84 on the field.

Though he is certainly not Antonio Brown, Bussey sure had a great day Thursday and spoke to reporters after practice, touching on how much he loves playing in the Steelers’ new offense under coordinator Matt Canada.

“I love it,” Bussey said. “It seems like we are always open. It’s always someplace we can make a play, so it’s a real good offense.”

Bussey capped off a great practice by hauling in a 30-yard touchdown from Dwayne Haskins on the final play of Thursday’s session.

Bussey, who spent most of his college career at North Texas before transferring to Hawaii in 2020. While at North Texas in 2018, the wide receiver had a great season in which he hauled in 68 passes for 1,017 yards and 12 touchdowns. He only played in two games the following season due to injury before playing in just seven last season in Hawaii, where he finished with 31 catches for 274 yards and touchdown.

It’s far too early to read into anything Bussey did on the second day of padded practice at Heinz Field, but the undrafted rookie put together a great day and will need to continue stacking days like the one he put together Thursday if he wants to stick around in Pittsburgh long-term, whether that’s surprisingly on the 53-man roster, or on the practice squad.