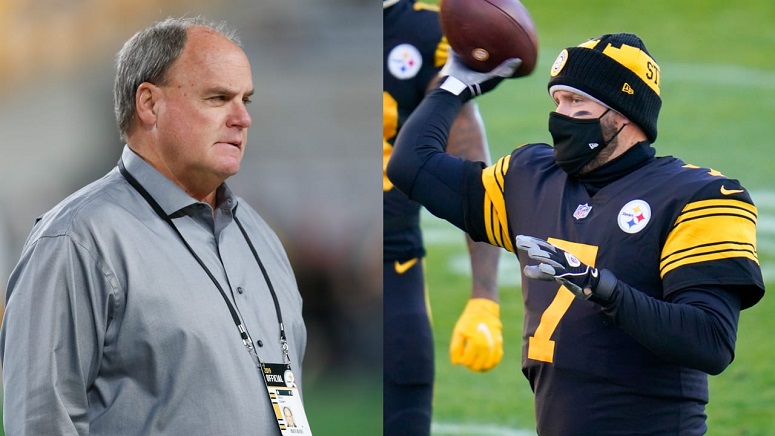 The biggest decision that the Pittsburgh Steelers had to make was figuring out what to do with quarterback Ben Roethlisberger and his salary cap. Listening to comments over the course of the early portions of the offseason, it certainly sounded as though releasing him was on the table.

Retiring, though, was never on Roethlisberger’s mind, according to general manager Kevin Colbert, who recently talked with Dan Sileo on The National Football Show on that topic on others, saying the quarterback let them know the story early on.

“To Ben’s credit, shortly after the season ended, he came and he visited with us—myself, Coach [Mike] Tomlin, Mr. [Art] Rooney—and he stressed that he really wanted to come back and play in 2021”, Colbert told his host during the interview. “And he knew, in order to do that, he was probably gonna have to make some adjustments to his contract, which he was very willing to do”.

Roethlisberger was due to have a salary cap hit of $41.25 million for the 2021 season, the final year of his deal. He was owed $19 million in cash, between base salary and roster bonus, with the rest of that number stemming from prorated signing bonus money.

The difference between releasing him and restructuring his contract without a pay cut would have been about $4 million in 2021. Roethlisberger, though, ultimately consented to a $5 million reduction in his compensation on top of the addition of four void years on an otherwise standard restructure, which shaved off another $1 million on this year’s cap.

“He was very willing to do that at this point in his career”, Colbert said. “He’s won Super Bowls. I’m sure he’s gonna be a Hall of Fame player. But he’s not done. He stressed that, and was willing to not only stress it, but to do something to make it doable for us, which he did. Now it’s up to us to act on it”.

Ultimately, the Steelers shaved off $15.34 million at the time off of their salary cap figure for the 2021 season with the moves that they made to get Roethlisberger’s contract down to a more palatable number. And, of course, they were able to retain his services.

In the same interview, Colbert also talked about how that move helped set a precedent to allow them to keep some other veteran players they weren’t sure they would be able to retain, perhaps referring to Cameron Sutton, and Vince Williams, the latter of whom was originally released but later opted to re-sign on a veteran-minimum deal. Tyson Alualu previously agreed to a deal with the Jaguars before changing his mind and coming back.

Roethlisberger said a month ago that it was his idea to give some money back, and that claim raised some eyebrows, but Colbert’s comments seem to suggest that there is at least some truth to that. I’m sure he didn’t volunteer a $5 million pay cut (if he had, it probably would have gotten done much sooner—but at least this seems to lend some credence to the story.