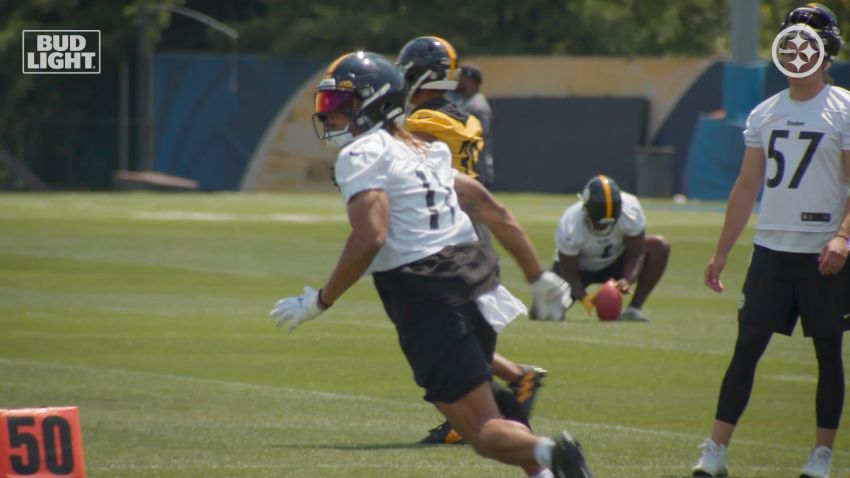 The talent at wide receiver is going to be a central focus for the Pittsburgh Steelers this season, not simply as an offense, but for the team as a whole. At least on paper, it figures to be one of their most concentrated compartments of talent on the roster, and they have to find ways to maximize that resource.

Much is being made of second-year wide receiver Chase Claypool in particular, and what he can deliver as an encore from a promising rookie season. He caught 62 passes last season for 873 receiving yards, catching nine touchdown passes and adding two more as a runner. He caught another two touchdowns in the Steelers’ postseason game.

For the young wideout, there is only so much he can control, however, and on Friday, he was asked about what he is prioritizing in his game as he enters year two, and he said that his focus remains the same, highlighting “route running and releases”.

Going back to college, Claypool has worked a lot in the offseasons with former NFL wide receiver T.J. Houshmandzadeh, and it wouldn’t be surprising to learn that those were two of his strengths as a player. He carved out an 11-year career as a seventh-round pick, and later dabbled in coaching at the high school level before working with wide receivers.

The former Notre Dame product did talk about some things he’s noticed going into his second season, talking about feeling more confident in his game, his processing speed slowing down; generally the typical sort of things you hear from players in this stage of their careers.

“I just know what to expect”, he said. “I know how to prepare now. Everything’s good”. He talked about improving his ability to recognize coverages, having more detail in his playbook and polish on his routes, as well.

Claypool also hopes to have a wider variety of assignments this season. While we don’t have a log of every route he ran, the preponderance of his targets came on out routes and slants, accounting for 34 total targets, or close to a third of his total. He had another 12 on fly routes.

Most other patterns only featured one or two targets, so there is clearly room for the coaching staff to diversify his assignments, which is one thing that new offensive coordinator Matt Canada is hopefully focused on.