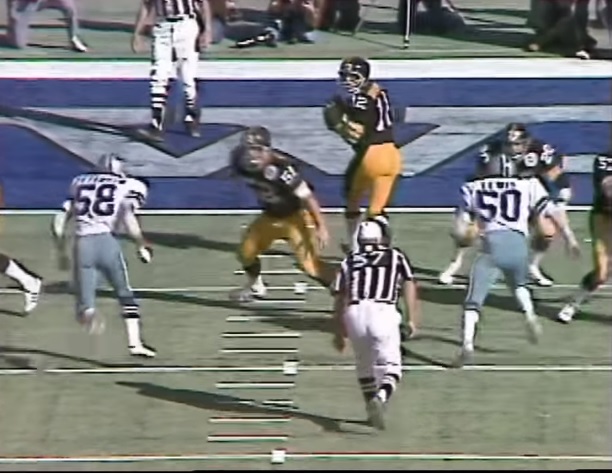 I want to focus on the underrated players who made those plays happen. For just a second, taking the focus off Parker, Harrison, Harris, and whoever else we come up with, and highlight those who made key contributions that led to those amazing moments.

Lynn Swann’s known for making unbelievable catches in his career. Some of the prettiest grabs by any receiver, even to this day. Something about his grace, his body control, those ballet lessons growing up, turned him into an artist competing for the ball downfield.

The most memorable catch of his career came in Super Bowl X, a juggling grab down the right sideline. Before we get into that, let’s set the stage.

On the possession before his amazing grab, Dallas was driving deep downfield. After a completion to Charley Young, the Cowboys had 1st and 10 on the Steelers’ 20 with four minutes left in the half. But a failed run combined with two sacks of Roger Staubach pushed Dallas back to Pittsburgh’s 35. Not risking a 52-yard field goal attempt, the Cowboys disappointingly opted to punt. Mitch Hoopes pinned the Steelers at their own six.

After a pair of two-yard plunges, the Steelers faced 3rd and 6. Still just outside their own end zone, Dallas sent the house. An aggressive call, hoping for pressure that could result in a sack, maybe a safety, or a turnover. The Cowboys blitzed LBs Lee Roy Jordan (#55) and Cal Peterson (#58) up the middle.

Mike Webster, like he always did, picked up his man, Peterson. That left Bleier one-on-one with Jordan. If he doesn’t make the block, Dallas has a free path to Terry Bradshaw backpedaling into his own end zone. But Bleier made a tremendous cut block that sent Jordan flying into the ground, keeping the pocket clean for Bradshaw to fire away and hit Swann, who finished with that remarkable catch.

The other thing to remember about this drive is the Steelers didn’t even come away with points. Roy Gerela’s 36-yard field goal veered left, leaving the Steelers still down 10-7 at the break. But Bradshaw hit Swann for a 64-yard TD in the fourth quarter to boost the team’s lead and hold off a potential Cowboys’ comeback.

Still, it was that Swann catch that gets remembered the most. Rightly so. Up until David Tyree’s and Santonio Holmes’ Super Bowl grabs, it was probably the best one ever. But if it wasn’t for a guy like Rocky Bleier doing the dirty work, that play might not have happened. And who knows if the Steelers still win their second Super Bowl en route to a dynasty.