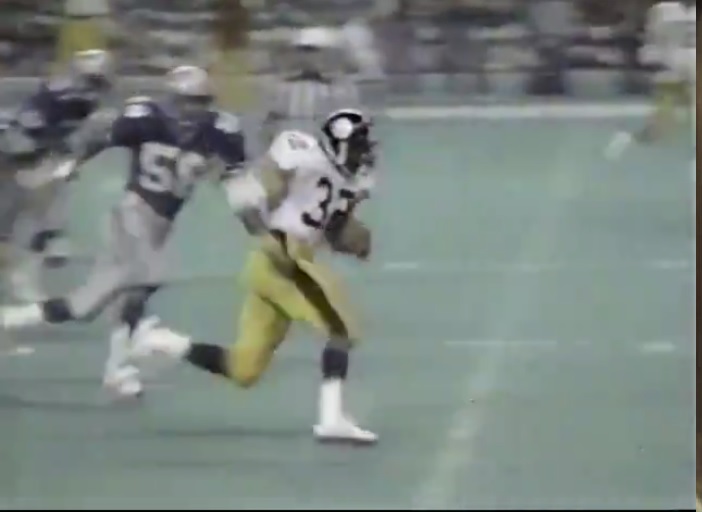 New series I’m starting this offseason to bridge the gap from now until training camp. Nostalgia-heavy posts and maybe ones that bring a tear to your eye. In these articles, we’ll be revisiting the final touchdown or notable play in the career of some of the Pittsburgh Steelers’ greatest players. Their swan song, us celebrating their final celebration.

It was 1983. And a 33-year old Harris turned back the clock. On the road against the Seattle Seahawks, Harris rushed for 132 yards on 31 carries, helping to lead the Steelers to a 27-21 victory.

First quarter, 2nd and goal from the nine. The Steelers run one of their famous counter plays. Harris steps to his left, buying time as guards Craig Wolfley (#73) and Rick Donnalley (#55) pull around to lead the way. The Seahawks are blitzing and can’t defend the edge, flying up the middle into a mess of bodies. Donnalley leads the way, hooking the linebacker inside and Harris runs off his hip, shielding himself across the goal line, absorbing the blow of the final two Seahawks’ defenders. End zone. Touchdown.

Even on this run, the last touchdown of his career, you could feel like his body was falling apart. Harris is slow to get up and there’s hardly a celebration as he makes his way to the sideline. But he stayed in the game and finished well over the century mark, the second-to-last 100-yard game of his career. He’d put up 103 in Week 15 against the Jets.

Harris spent the final year of his career in Pittsburgh in 1983. He rushed for over 1,000 yards, though just barely (1,007), to lead the Steelers one final time. A breakdown in contract talks led him to be released by the Steelers in August of 1984.

Needing under 400 yards to break Jim Brown’s record for rushing yards, he signed with the Seattle Seahawks. But he ran for only 170 yards for Seattle, falling short of the record. He didn’t find paydirt with his new team, either. So there’s a twinge of irony that Harris’ final rushing score was against the final team he’d play for, retiring after the ’84 season.