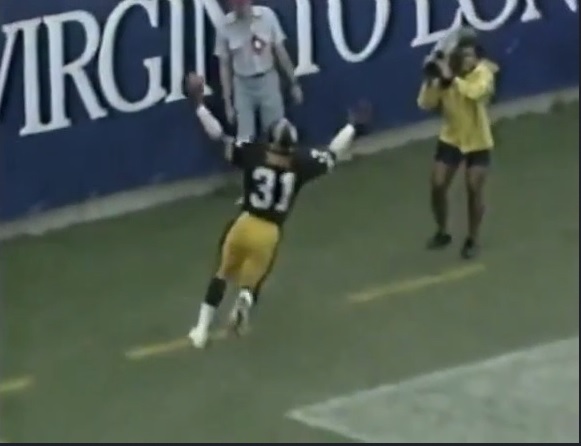 In the second edition of this series, we’re taking a look at Donnie Shell’s final interception.

Here’s a quirky “stat of the weird” for you. Donnie Shell had just one career interception against the Miami Dolphins. It was his final one, #51 of his brilliant Steelers’ career. And it came against Dan Marino in 1987, the only pick Shell would register in his NFL final season.

It was a bit of a fortunate play. Marino tried to force a tight-window pass on a Y-stick to his tight end on the right side. LB Mike Merriweather closed quickly and the pass banged off the chest of Marino’s target, tipped into the air and into Shell’s awaiting hands. He knew what to do with it, racing 50 yards down the left side and into the end zone. It was just the second pick-six of his career.

That put Pittsburgh up 14-0. But in typical Marino fashion, he led Miami to a comeback, scoring 28 second-half points in a 35-24 Dolphins’ win.

Shell’s 51 interceptions rank third in Steelers’ history only behind Mel Blount and Jack Butler. When he retired after the ’87 season, his total ranked in the top 20 of NFL history. That last pick capped off a Hall of Fame career, though his selection was long overdue. When he gets inducted this summer, maybe you’ll see this play as part of his highlight reel. Not a bad career for an undrafted free agent and part of the legendary group of 1974 rookies alongside Lynn Swann, Jack Lambert, John Stallworth, and Mike Webster.