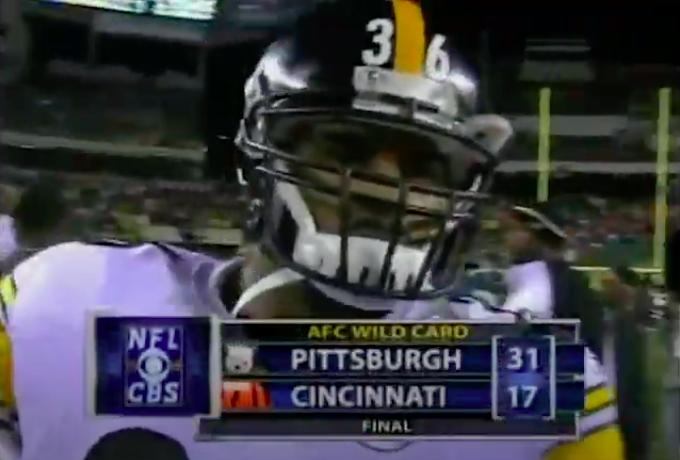 At one point late in the 2005 season, the Pittsburgh Steelers found themselves on the outside of the AFC playoff picture in Hall of Fame running back Jerome Bettis’ final season in the black and gold.

You all know what happened next. The Steelers reeled off nine straight wins — including three in a row on the road in the playoffs — to become the first No. 6 seed in NFL history to win the Super Bowl, sending Bettis off on a high note.

Coincidentally, that run in the playoffs started with future Hall of Fame quarterback Ben Roethlisberger’s second career playoff win, seeing him take care of the football unlike what he did in his rookie season, attempting just 19 total passes and avoiding turnovers as the Steelers came back from two 10-point deficits in the first half to shock the No. 2-seeded Cincinnati Bengals at Paul Brown Stadium, 31-17.

Opening up the game, the Bengals forced the Steelers into punting the football away, setting up an explosive Cincinnati offense on home turf.

Two plays later, Carson Palmer was writhing on the turf with a torn ACL after a low hit from Kimo von Oelhoffen, stunning the 65,870 in attendance for the AFC Wild Card matchup. On the play, Palmer hit receiver Chris Henry for 66 yards, setting the Bengals up in scoring position right away.

Seven plays later though, the Steelers’ defense held, as Cincinnati kicker Shayne Graham kicked a 23-yard field goal to give the host Bengals a 3-0 lead.

On the next Bengals’ drive following another early Steelers’ punt, Cincinnati running back Rudi Johnson raced 20 yards off left guard for the score, pushing Cincinnati’s lead to 10-0 in front of a raucous crowd, putting the upstart Steelers on their heels.

Pittsburgh finally mounted its first real drive of the game, thanks to some vintage Ben Roethlisberger escapism. Facing a third and five, late in the first quarter near midfield, Roethlisberger avoided a would-be sack and moved the chains.

Five plays later, Roethlisberger found Willie Parker on a perfectly-executed screen pass for a 19-yard touchdown, getting the Steelers on the board in the AFC Wild Card showdown. It’s great to see the Steelers executing screens like this so long ago, considering they’re absolutely dreadful in that department as of late.

Riding high after the touchdown drive, the Steelers were back in the game. The Bengals quickly took the wind out of the Steelers’ sails though, embarking on a 16-play drive that ended in a seven-yard touchdown pass from Jon Kitna to T.J. Houshmandzadeh, giving Cincinnati a 17-7 lead in a game that they looked to be in control of.

That would be it for the Bengals in the scoring department, though, as the Steelers’ defense pitched a shutout in the second half. More on that later.

Down 10 points yet again, the Steelers stuck with what worked on the previous drive, leaning on Roethlisberger’s right arm. The second-year quarterback hit veteran receiver Cedrick Wilson for 54 yards, and then Antwaan Randle El for 15 yards on the left sideline, setting up this dart of a touchdown to Hines Ward from five yards out, making it 17-14 heading into the halftime break.

Coming out of the half, the Steelers’ defense put together a stop — sort of — holding the Bengals to a field goal attempt. Lady Luck was on the Steelers’ side as the snap went high over Kitna’s head on the field goal try, forcing Graham to dive on the football at the 34 yard line, giving the Steelers possession in a three-point game.

Nine plays later — aided by a 40-yard pass interference penalty drawn by Randle El — Jerome Bettis shimmied his way into the end zone, giving the Steelers their first lead of the game at 21-17 in Paul Brown Stadium.

Bettis, in the final year of his career, showed off his quick feet in the hole once again, forcing a Bengals’ defender to whiff one-on-one, allowing the veteran running back to find pay dirt.

With a lead in hand, Pittsburgh’s defense turned up the heat on the Bengals’ next drive. Larry Foote and Clark Haggans sacked Kitna on second down, and then sacked the quarterback again on third down, forcing a punt. That punt by Kyle Larson traveled just 30 yards, giving the Steelers possession at the 50 yard line.

Three plays later, Randle El hit Roethlisberger on a throwback, allowing the second-year gunslinger to find Wilson wide open downfield for the 43-yard touchdown and a 28-17 lead, sucking the life out of Paul Brown Stadium.

From there, the Steelers’ defense was suffocating, sacking Kitna again before veteran linebacker James Farrior stepped in front of a pass over the middle for an interception. That set up one final Steelers’ scoring drive that was aided by a 25-yard rumble off left tackle by Bettis, leading to Jeff Reed’s 21-yard field goal for a 31-17 lead.

Kitna had one more turnover up his sleeve, as Troy Polamalu showed off his Hall of Fame range over the middle, diving in front of a throw for a highlight reel interception, sealing the win.

The win sent the Steelers onto the divisional round, where they’d continue their winning ways all the way to Super Bowl XL. In the win over the Bengals in the Wild Card Round, Roethlisberger finished 14-for-19 for 208 yards and three touchdowns. The Steelers saw Bettis, Parker, and Verron Haynes combine for 136 rushing yards and a score as the Steelers dominated in the trenches.

Wilson led the Steelers in receiving with three catches for 104 yards and a touchdown.

Defensively, the Steelers sacked Kitna four times and picked him off twice, holding the Bengals’ high-powered offense to just 327 yards in a game in which they were trailing throughout the second half.