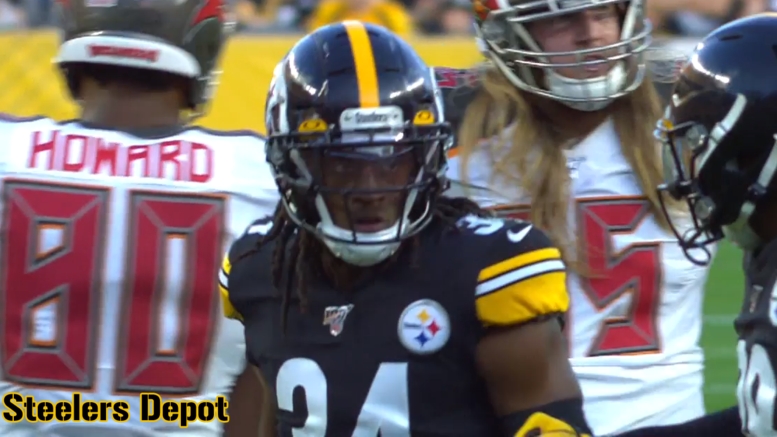 When Terrell Edmunds’ name was called in the first round of the 2018 NFL Draft for the Pittsburgh Steelers’ selection, many in attendance and watching at home were in shock.

The thought was the Steelers reached in the first round for a guy who could have been had in the third round. After that, things seemed to turn around a bit with with the selection of receiver James Washington, but then back-to-back selections of QB Mason Rudolph and project tackle Chukwuma Okorafor left many scratching their heads as the Steelers continued to go away from positions of need, grabbing guys that wouldn’t have an impact at all early in their careers — or so the thinking went.

Flash-forward three years later and Edmunds has started every game he’s played for the Steelers, playing nearly 3,000 snaps to date. Rudolph has been serviceable as a spot starter, while Okorafor and Washington have held down key roles on offense, including Okorafor slotting in as the starting left tackle in 2021.

All that is a roundabout way of saying the 2018 class was an average one. The Athletic’s Dane Brugler is a bit lower on the class as a whole, ranking it 25th in the NFL in his recent draft regrade rankings piece (subscription required).

Brugler’s No. 25 ranking of the Steelers’ class slots them in comfortably as the “worst” class in the AFC North, with the Ravens coming in at No. 1, the Browns at No. 4, and the Bengals at No. 18.

According to Brugler, Edmunds remains the Steelers’ best player of the class, though he has been up and down to say the least.

“Edmunds has been polarizing. He has been productive with 251 tackles and three interceptions over 43 starts, but has had his share of missteps. Still, Edmunds has been the best player from the 2018 class for Pittsburgh,” Brugler said.

However, Brugler also says Edmunds is the Steelers’ biggest miss in the class.

“It usually is not a great sign when a team’s best player from the draft class is also their biggest miss. But that is the situation with the Steelers. Ranked No. 90 overall on my 2018 draft board, it was a surprise to hear Edmunds’ name called at No. 28. And while he has been productive and qualifies as the top player from the Steelers’ class, he has not lived up to being a first-round pick,” Brugler said.

It’s important to point out though that the Steelers found a defensive starter in Edmunds, one that two games in his career. While he was undoubtedly a reach at No. 28 overall that year (especially with a guy like Cincinnati’s Jessie Bates on the board), it’s hard to overlook the fact that he’s started, shown flashes and is consistently available.

There is some good news out of Brugler’s piece though, as the NFL Draft analyst pegged Okorafor as the Steelers’ best value pick. Okorafor — though he lost the training camp battle for the starting right tackle job last summer — appeared in all 16 games last season, starting 15 games after Zach Banner tore his ACL late in the Week 1 win over the New York Giants. In total, Okorafor has appeared in 30 games in three years and looks to be the starting left tackle in Pittsburgh this season.

“After Zach Banner tore his ACL in Week 1 last season, Okorafor stepped in at right tackle and started the final 15 games. While it was not always pretty, he showed improved unison between his hands and feet to control defenders. With a strong training camp, Okorafor might be the Steelers’ starting left tackle in the season opener,” Brugler said.

Though it certainly is a draft class that left much to be desired at each pick considering the guys on the board, it’s hard to say this is a bad class overall when you take into account that they found one legitimate starter in Edmunds, a possible second in Okorafor, the likely starting QB in 2022 in Rudolph, and a more-than-serviceable depth receiver in James Washington.

It’s definitely not one of General Manager Kevin Colbert’s best classes, but it’s far from one of the worst ones in the longtime GM’s career too.