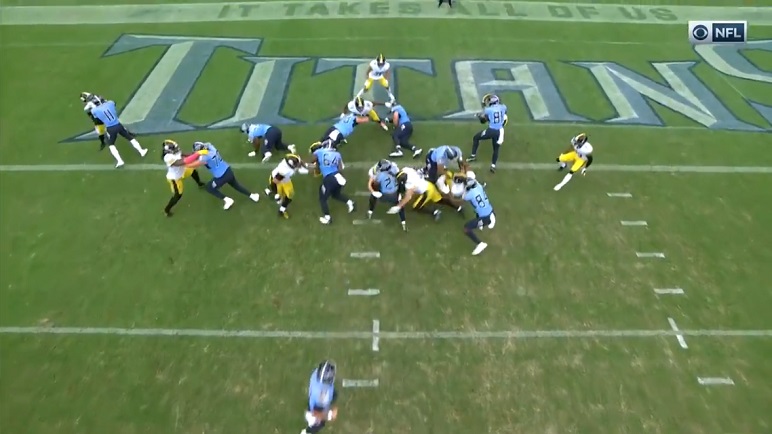 The third down, goal-line stop that Pittsburgh Steelers inside linebacker Robert Spillane had last season on Tennessee Titans running back Derrick Henry certainly put the former undrafted free agent out of Western Michigan on the map. That video clip went viral, and it won’t soon be forgotten. On Thursday, Spillane met the media after the team’s afternoon OTA session and during his interview he was asked about last year’s hit on Henry and what it meant to him.

“Yeah, that’s a play that was special to me,” Spillane said. “Not only because it was a third down, goal-line stop against perhaps the best running back we’ve seen in the NFL in some years, but also being that the Tennessee Titans were the team that released me after my rookie season. And that being my first career start as an inside linebacker for the Pittsburgh Steelers, my whole family renting a bus and coming down to Nashville for that game, so, yeah, that brings back a lot of good memories.”

Spillane started the 2020 NFL season as a backup. However, after starting inside linebacker Devin Bush went down with a serious knee injury that would sideline him the remainder of the year, Spillane was the one who took over that spot in the defense. He then went on to start the next seven games in place of Bush before a knee injury of his own forced him to the team’s Reserve Injured list the remainder of the regular season.

Spillane ended the 2020 regular season with 43 total tackles on defense and two sacks. He was also credited with four tackles for loss, three quarterback hits, four passes defensed, a fumble recovery and one interception, which he returned for a touchdown. Spillane also had two total special teams tackles on the season. He played 377 total defensive snaps during the regular season and 153 more on special teams. In the Steelers lone playoff game, Spillane played another 59 defensive snaps and 12 others on special teams. He registered nine total tackles in that contest.

Not surprisingly, Spillane was tendered as an exclusive rights free agent earlier in the offseason and with him now back in the fold, and with Bush also returning from his 2020 knee injury, it will be interesting to see if he can ultimately win a starting job. The Steelers did re-sign veteran inside linebacker Vince Williams during the offseason after initially cutting him, so both he and Spillane might be the primary combatants during training camp to see which one starts alongside Bush to open the regular season.

As for Spillane and Henry and the Titans, the Steelers will host Tennessee at Heinz Field in Week 15 and so we might just get to see a few more big collisions between the inside linebacker and running back if both end up playing in that contest.