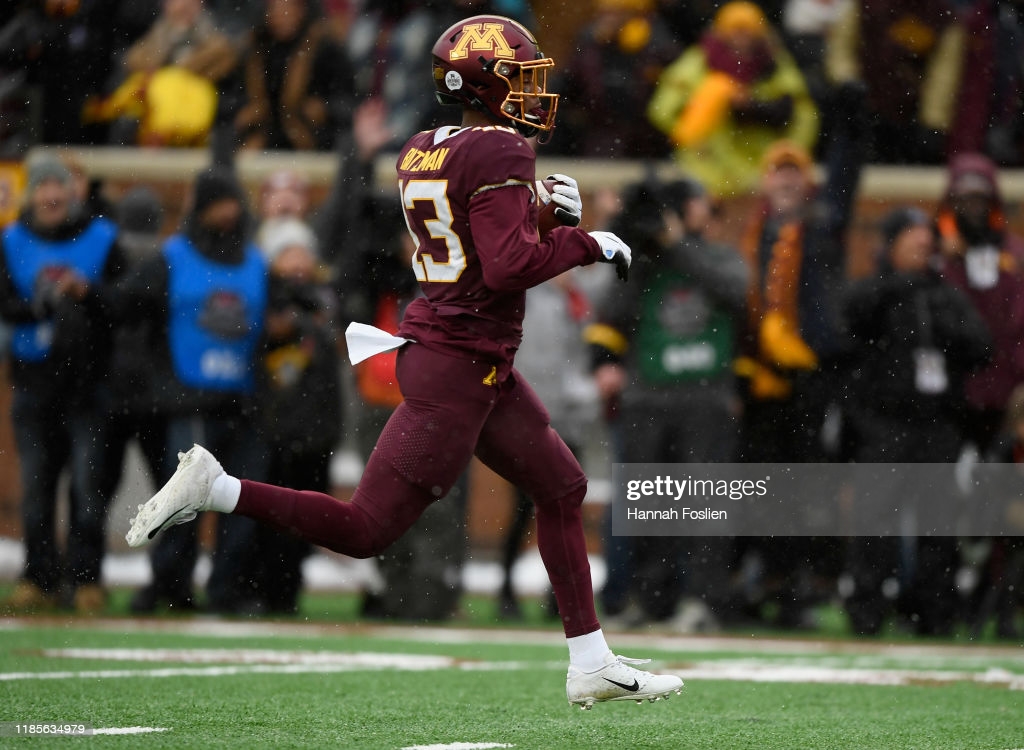 The Baltimore Ravens are not averse to taking big swings at the wide receiver position. It’s just that their history of doing so has been spotty at best. But they used another first-round draft pick on a wide receiver this year in Rashod Bateman, and are hoping for better, more consistent results.

For cornerback Marlon Humphrey, at least, he has been impressed with what he has seen so far from Rashod Bateman, the man in question. Humphrey is an All-Pro player, so one would hope that he has some insight into what makes a wide receiver good at what he does.

“Bateman – I couldn’t really tell about him”, he told reporters during minicamp last week. “I’m like, ‘ehh, ehh’, then he hit me with something, caught the ball, ran out of bounds and came up and tapped me on the butt, and was like, ‘I’ve got a little wiggle, too’. So, I was like, ‘I like that’. Really good guy right there”.

He joins a couple of other first-round picks in the wide receiver room, including Marquise Brown, who was the Ravens’ first-round pick in 2019. While they are still looking for more consistency out of him, he does have 104 receptions for 1,353 yards and 15 touchdowns during that time, and Baltimore throws fewer passes than anybody.

The team also added Sammy Watkins in free agency, a veteran player who was originally drafted fourth overall by the Buffalo Bills in 2014. Though he is entering his eighth season already, he is still just 28 years old after having had his birthday earlier this month.

The trio figures to be the Ravens’ top three at the position, but they also have to sort out the rest of the depth chart, consisting largely of recent draft picks such as Miles Boykin (third round in 2019), Devin Duvernay (third round in 2020), and Tylan Wallace (fourth round in 2021).

“Whatever group makes it, we’ll have a really serious, good passing attack — just with what those guys can do. I think it’s been a really good OTAs for all those guys”, Humphrey said of his team’s wide receivers, which should on paper be more formidable than any other group he has faced in practice.

“I think it’ll just be a much different year than what we’ve seen in the past out of our corps”, he added. “And the best thing for me is when you’ve got really good wide receivers that are doing good things in practice, it makes training camp that much more realistic, because that’s the work we need”.