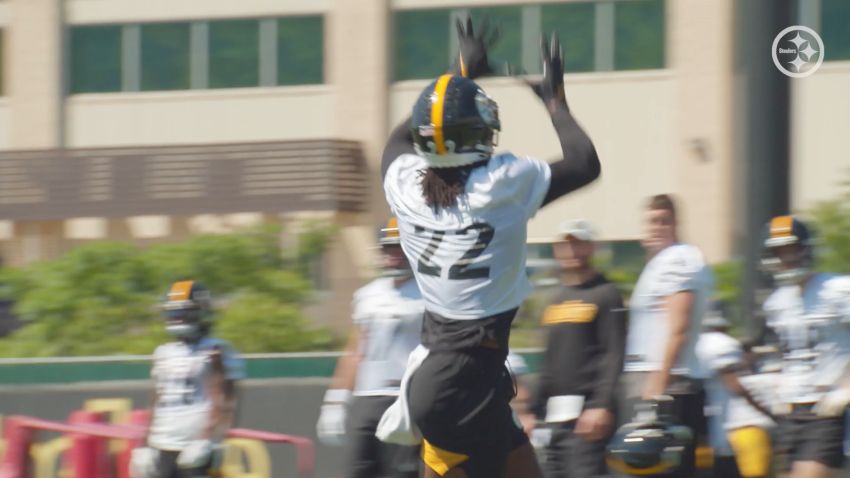 When the Pittsburgh Steelers selected Najee Harris with the 24th pick, they weren’t just getting a running back. They were getting a complete player. Runner, receiver, and blocker. Now, Harris’ new teammates are getting a first-hand look at the offense’s latest weapon.

After Harris made a sensational one-handed grab yesterday, WR Diontae Johnson described the impact he’ll have on the entire offense.

“It’s different,” Johnson said of Harris. “It takes a lot of pressure off the receiver. Obviously having a guy like him to catch out of the backfield is special. Because it also puts a lot of pressure on the defense. They also have to worry about covering a running back who is capable of obviously catching like a receiver. Just being around him, seeing his work ethic and how hard he practices, it shows he’s hungry and that he’s ready to play.”

Harris appeared to sky over LB Robert Spillane in the corner of the end zone for this touchdown during yesterday’s minicamp. Dave Bryan pieced together team photos into a GIF.

Made a gif out of those pictures of the Najee Harris (@ohthatsNajee22) catch by @karlroser from here #Steelers https://t.co/vZ30F24ibh pic.twitter.com/Yy1eV2U4No

Of course, those who followed the draft closely knew Harris was one of the top receiving backs in the draft. Over his last two years at Alabama, he caught 80 passes, 11 of those winding up in the end zone. Despite his big size, he’s quick, athletic, with great hands and body control. It’s earned him comparisons to guys like Le’Veon Bell, arguably the best receiving back in team history, and Matt Forte.

Running backs have often been involved in the Steelers’ quick pass game offense. Le’Veon Bell averaged five catches per game during his time with the team (that averages out to 85 in a 17 game season). James Conner caught 55 in his best season with Pittsburgh, his 2018 campaign where he still missed three games. Had he played in all 16, he would’ve been on pace to catch 67.

It’s why we wrote earlier this offseason that Harris has a legitimate chance to break the Steelers’ rookie record for receptions, a mark set by Chase Claypool last year with 62 of them. With an extra regular-season game and Harris’ receiving chops, he should, as Johnson spoke to, help this offense out in a lot of ways.