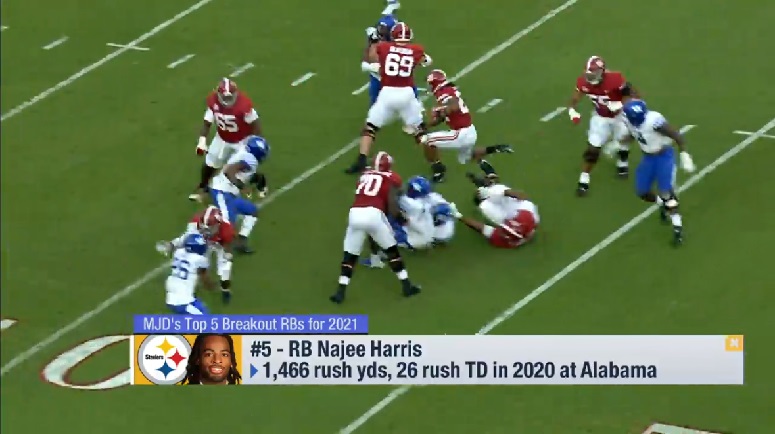 On Thursday, NFL Network’s Maurice Jones-Drew broke down his top five breakout running backs for the 2021 season on “Good Morning Football” and the Pittsburgh Steelers’ 2021 first round draft pick made his list.

Jones-Drew has Steelers rookie running back Najee Harris fifth on his list and below is reason for ranking him there.

“The thing about Najee Harris, he is from Antioch, California, my hometown, right? So, he has to be on this list,” Jones-Drew said. “Not only that, though, 6’1″, 235 pounds, can run inside, run outside. He’s so versatile. They didn’t really utilize him at Alabama the way he was able to go out and catch the ball out of the backfield. I got a chance to coach against him in high school in both seven-on-seven and tackle football, this guy’s just a true monster. He’s a pro’s pro. You’ve heard Ben Roethlisberger talk about how he won’t leave the facility. So, this guy here, he’s going to have a tremendous year, regardless of their O-line issues, all that, he’s going to play lights out. Le’Veon Bell 2.0.”

Jones-Drew labeling Harris as Le’Veon Bell 2.0 isn’t a huge surprise as that’s pretty much been the comp for the Alabama product for a while now. It is, however, interesting to hear Jones-Drew say that Alabama didn’t really utilize Harris in the passing the game the way he thought they should’ve. That’s quite a statement being that Harris managed to catch 80 passes for 781 yards and 11 touchdowns during his career at Alabama, with 70 of those coming in his final two seasons.

I don’t know, I think Harris has a very good shot at putting up more total yards from scrimmage than a few of those other four running backs, if he stays healthy. What say all of you?

Rankings aside, it’s clear that Jones-Drew, who played running back in the NFL for nine seasons, believes that Harris is poised to have an outstanding rookie 2021 season. Time will tell if he is right and with the Steelers having a first round draft pick invested in Harris, hopefully he is.