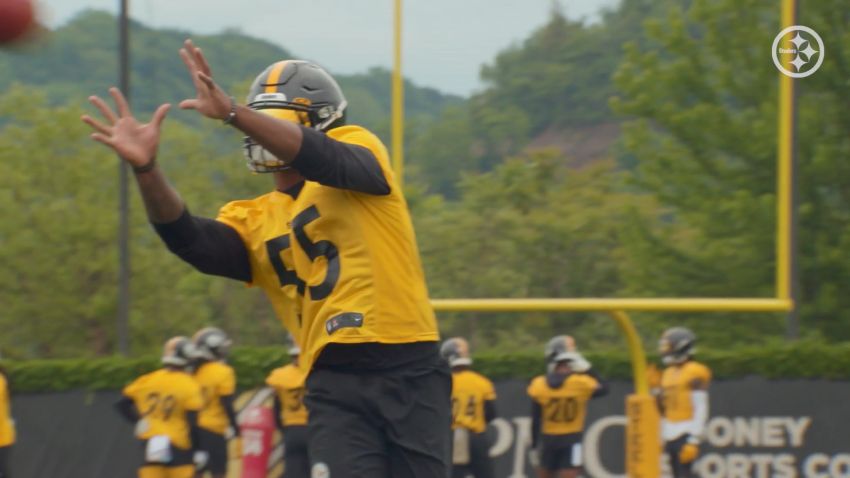 Devin Bush made an immediate impact in 2019, becoming the first Pittsburgh Steelers rookie to post 100-plus tackles in a season, and producing six takeaways, including two interceptions. He won the fan voting for the Pro Bowl that year, but ultimately did not make the real thing.

He was primed for a bigger role in 2020, which included stepping into the signal-calling role, but a torn ACL suffered five games into the season rearranged his and the Steelers’ plans. Instead, he has spent his time since then rehabbing his knee, which he says should be 100 percent in time for training camp. He also talked about the importance of being around everybody while getting better.

“I thought it was a good idea to be with the guys, be with the organization”, he said after practice earlier today. “Of course, they made a big investment in me, and for them to check my progress and be able to be with me every step of the way, to kind of know where I’m at, and know where I should be. They keep a sharp eye on me, and make sure that I can deal with this injury from here on out”.

The Steelers spent nearly a year and a half between the 2017 and 2018 seasons watching what had become of their defense without a premiere talent at the inside linebacker position after former first-round pick and two-time Pro Bowler Ryan Shazier suffered a career-ending injury on the field.

They promptly turned around and made their boldest move of the Mike Tomlin era by trading up 10 spots in the first round of the 2019 NFL Draft, going from 20 to 10, to select Michigan inside linebacker Bush to be the new nucleus of their defense.

There was a clear difference in the unit’s range after he was out, and they are very eager to get him back into the fold. Teammates have already talked about how they are excited to see him out there, even just going through individual drills, knowing what he is able to bring to the table.

Bush was such a hot commodity because he has elite speed for the position. As mentioned, the Steelers got used to having that in Shazier, their first-round pick in 2014. That type of athleticism erases a lot of mistakes and gives you range to make plays that you wouldn’t otherwise be able to reach, or to reach them further afield.

It clearly was not the same with Robert Spillane manning the mack linebacker position, which is meant to be no knock against him. Spillane is more of a buck, which is where he should be playing this year, along with Vince Williams, and that position should be in good hands going forward.

The thing is, you just don’t find many players like Bush, which is why they tend to be picked up early. The inside linebacker position as a whole is not one that is often valued highly, but the top-end athletes tend to demand a premium investment. That’s what the Steelers paid for Bush in 2019, and he wants to ensure that they get the return they were banking on, which includes the monitoring of his rehab process.