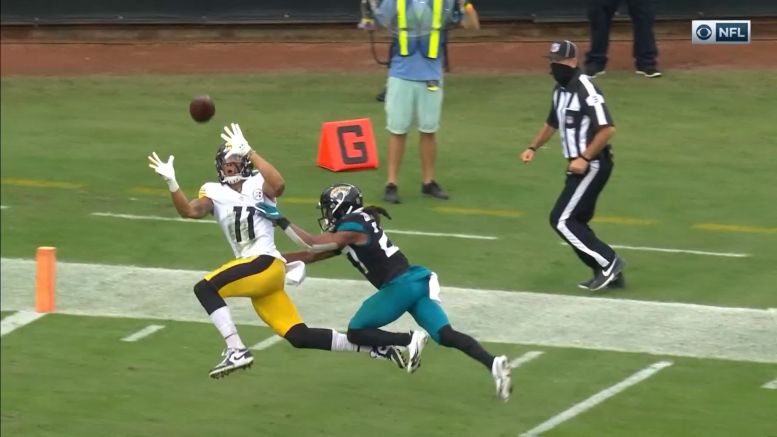 While he’s not the dynamic route runner that Diontae Johnson is, or the chain-moving machine out of the slot that JuJu Smith-Schuster is, Claypool is arguably the most valuable receiver the Steelers have on the roster, thanks to his ability to draw coverage due to his deep threat ability and red-zone capabilities.

According to Hayden Winks of Underdog Fantasy, Claypool had the biggest impact on the Steelers’ offense in 2020 with a mark of +0.14 Expected Points Added (EPA) of any receiver on the Steelers’ roster per dropback in 2020. When Claypool is off the field, that EPA for the Steelers drops to -0.13.

The Steelers EPA per dropback…
With Chase Claypool: +0.14
Without Claypool: -0.13
per @SportsInfo_SIS

They don't threaten deep at all without Claypool on the field. He *has to* be a full-time player in 2021. No choice imo.

EPA is the average Expected Points Added per play in which an offensive player is directly involved.

Those numbers from Winks — courtesy of Sports Info Solutions — shows just how valuable Claypool is, at least to the naked eye.

Undoubtedly, what helps the Steelers when Claypool is on the field is his ability to work deep, drawing coverage away from guys like Johnson, Smith-Schuster and James Washington. At 6’4″, Claypool is more than just a big-bodied receiver. He runs a 4.46 40-yard dash and knows how to stack defenders down the field and win vertically. Winning vertically opens things up underneath, where guys like Johnson, Smith-Schuster, and even Eric Ebron can exploit one-on-one coverages and overall mismatches.

Now, with new offensive coordinator Matt Canada in the fold, it’s easy to expect Claypool to be used in a similar fashion as he was in 2020, while likely being moved more around the formation on pre-snap motions, getting ideal matchups in coverage, and drawing coverage to take away deep shots, opening things up for his fellow receivers.

The key there will be if Ben Roethlisberger can dial in the deep ball on a more consistent basis in 2021, turning Claypool’s league-leading pass interference penalty yardage downfield into larger splash plays, making the deep shots more of a threat for defenses to worry about.

Though he doesn’t run a complete route tree like Johnson does, Claypool is a real threat to defenses, scaring defensive coordinators into rolling coverage towards the big-bodied receiver, which opens things up for others. With Canada now in charge of calling the plays and setting up defenses for the kill shot on drives, it will be interesting to see how he deploys Claypool, knowing how valuable he is overall to the Steelers, both as a playmaker and as a potential decoy.